In 2011 when I began preparing a new edition of Maurice Ravel’s piano Sonatine, I could not have imagined that I would discover anything new. The sources for the music text have long been known. The main source, as the composer’s ‘last word’, was naturally Ravel’s personal printed copy with autograph corrections and fingerings, preserved in the Paris Bibliothèque nationale de France. Also, the facts about the Sonatine’s genesis were seemingly well known. All authors and editors before me relied exclusively on an article titled, When Ravel Composed to Order, by Michel Dimitri Calvocoressi who lived in Paris from 1895 to 1915 and belonged there to Ravel’s circle of closest friends. In this article, appearing in 1941 in Music & Letters, Calvocoressi dealt with compositions that Ravel wrote on commission. Unlike Debussy, Ravel, by his own admission, very much enjoyed working on commission and to specification, and felt uniquely inspired as a result. Calvocoressi also referred to the Sonatine in his account:

What first puzzled me was the statement about length. The first movement of Ravel’s Sonatine comprises not 77, but 84 measures. Was then Ravel supposed to have handed in a shorter version? The assertion that Ravel had been the only participant also aroused my curiosity. Had this competition really been so unappealing? In short, I absolutely had to see with my own eyes the announcement in this ominous Weekly Critical Review that I had never before heard of.

My investigation revealed that the English-French cultural journal had come out only between 21 January 1903 and 25 March 1904, and is fully accessible even today only in a few libraries. Nick Hearn, a helpful librarian at the Bodleian Library in Oxford, quickly made an opportune find. The announcement I wanted first appeared on 12 March 1903 and was then repeated on 19 March, 9 and 23 April. 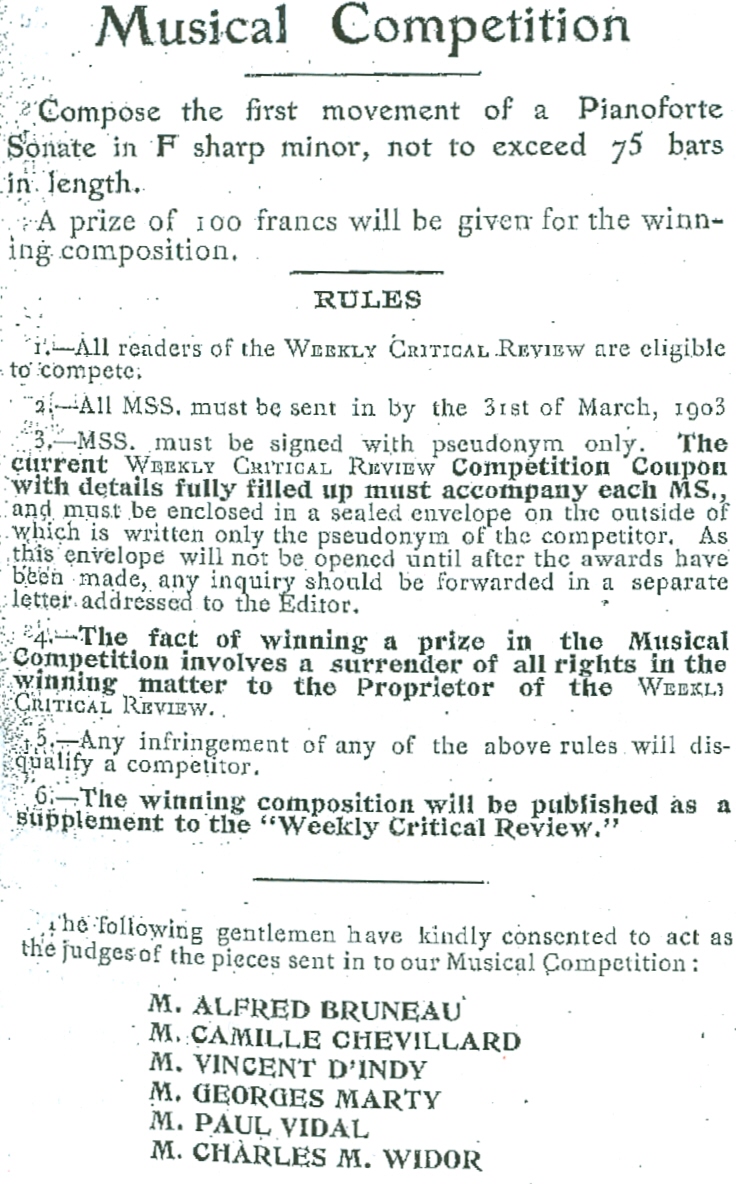 Comparing the text with Calvocoressi’s information brings up some interesting differences. The competition was advertised in 1903 (not in 1904); stipulated was the first movement of a piano sonata (not a sonatina), specifically in the key of F-sharp minor. What is more, Calvocoressi kept quiet about the fact that the winner could expect a prize of 100 francs (in today’s currency, about 350 €) and the publication of his manuscript in a supplement to the Weekly Critical Review.

That such a supplement ever appeared has never been proven, but does this have to mean that the competition – though repeatedly advertised – was cancelled for lack of contributors?

An autograph of the first movement of Ravel’s Sonatine, offered at Sotheby’s in 1999, shed in the dark a ray of light when the then-buyer kindly let me have a copy of this manuscript.

This is the original manuscript that Ravel submitted in 1903. The composer entry ‘par Verla’, in an unidentified hand (at the top right), was later replaced by ‘par Maurice Ravel’. And yes, according to competition rule no. 3, the composers were supposed to submit their contributions under pseudonyms (see figure 2), so that the jury consisting of prominent French musicians and composers would be impartial. It is especially characteristic of Ravel, who loved such games, that he chose an anagram of his name. The numerous engraver’s markings (for example, top left: ‘4 pl[anches] | au format ci-joint’ = ‘4 [engraving] plates | in the  accompanying format’) indicate, besides, that the manuscript was prepared for printing.

Did Ravel therefore win the competition? And if so, why was the supplement never printed? In the periodical there is alas no reference to it; Ravel himself, so far as is known, never uttered a word about the unusual genesis of the first movement of his Sonatine. To the contrary: his so-called ‘Autobiographical Sketch’ of 1928 stated succinctly: ‘After the collection of Miroirs I composed a piano Sonatine and the Histoires naturelles.’ Thus, Ravel suggested that the Sonatine in its entirety had originated after the completed Miroirs – it is also known that as early as 1904, Ravel had presented the first movement in salons at least twice. Comparison of the first autograph manuscript of the first movement with the completed score, dated ‘August 1905’ (Bibliothèque nationale de France), shows only minor differences, but, in particular, also no difference in length. Ravel had taken over the first movement, virtually unchanged, into the Sonatine, later expanded to three movements.

My curiosity contributed only a little to the edition of the music text (HN 1018), but a whole lot to the Preface and the Comments that in ‘Urtext’ editions are much more than mere accessories. Still, questions remain that can hardly be answered. Was Ravel later embarrassed by the past history of his Sonatine? Did he himself perhaps even withhold the print from the Weekly Critical Review?

Whether Ravel won the competition or not at that time – for him the Sonatine proved to be a windfall. It became one of his most popular piano works and put him in contact with the renowned Durand publishing house. Shortly after the composition was published (in November 1905), Durand offered him a contract with exclusive publishing rights for a fixed annual salary of 12,000 francs (today, about 42,000 €). Once again for Ravel, composing on commission had paid off …

One Response to »Curiosity pays off. The genesis of Maurice Ravel’s piano ‘Sonatine’«