Posted on September 16, 2013 by Annette Oppermann

The strings, together with the main instrument, piano, have all along played a large role in the Henle catalogue. As early as amongst the house’s first publications from the 1940s, standard string-repertoire works can be found with Beethoven’s cello variations and violin sonatas (HN 5 and 7/8, both of course meanwhile revised according to the text of the New Beethoven Complete Edition); in the last six decades this repertoire has been systematically extended from Bach to Berg (as, incidentally, can also be gathered from our 13 video Interviews with 13 internationally renowned violinists on 13 great violin works). The double bass, on the other hand, first came to Henle with the new millennium, and for that there are many reasons …

The double bass is in many respects absolutely distinctive: it is not exactly a born soloist, first of all, thanks to its low register – only in the 19th century did it come into its own, thanks to musicians happy to try out new things towards giving a virtuosic and brilliant instrument a solo literature of its own. Furthermore, the double bass was much less “standardised” – and is so even today – than the violin, viola or cello. It varied in size, form and stringing; depending upon school or repertoire, the three, four or five stings of the instrument were tuned in a variety of ways and played with a convex or concave bow in a technique of placing the hand under or on the stick.

Consequently, works originating for a certain instrument were not to be realised without further ado by another musician on another instrument or with another technique – not the best preconditions for widely disseminating a standard repertoire in uniform published editions! So it is also no wonder that many works for double bass circulated only in arrangements, even those by famous double-bass composers such as Domenico Dragonetti, whose musical estate, preserved for the most part in the British Library, London, consists there of countless volumes, but scarcely any printed editions.

With a double-bass composition, the obligatory Henle “practical Urtext edition” resembles there at times literally the circle being squared: for the original text of the composition ought to be recognisable, on the one hand, but at the same time it also has to be playable on the modern instrument. That already calls for an editor who is such an accomplished musician and enthusiastic philologist as Tobias Glöckler who has taken charge of our editions for double bass.

On his initiative we have already published the “Vienna” concertos by Dittersdorf (HN 759) or Hoffmeister (HN 721) in Urtext editions; these take into consideration, besides the historical “Viennese tuning” of the instrument, also the modern orchestral and solo tuning – which involve, amongst other things, publishing the same piano score of these concertos twice, as the solo tuning demands an accompaniment transposed up a tone. And thanks also to the various tuning variants, the solo part quickly becomes something more extensive, which is why in our Dittersdorf edition there is now a road map for the various possible combinations.

The situation is again different in preparing the Famous Solo in e minor by Dragonetti (HN 1198): In existence are a myriad of copies and arrangements of this famous concert piece for double bass and orchestra. So first of all, the authorised versions of the work must be picked out of the jumbled tradition, thereby manifesting an arrangement of the Famous Solo for double bass and string quartet in parts written out by Dragonetti himself. 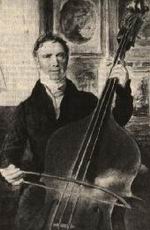 We did not want to withhold from the musical world this exquisite quintet version and immediately designed a double edition: piano arrangement of the orchestral version (naturally in two transpositions, tuned for orchestra and solo) and parts for the quintet version. But further decisions still had to be made because Dragonetti’s parts for the accompanying quartet do not provide for two violins, but for two violas. This scoring, unusual today, was, in fact, not uncommon at that time, but stirred up doubt in our special case: Why then did Dragonetti write “Violino Primo” over the violin part, if there aren’t two violins to begin with – and how to explain the strikingly numerous transposition errors in the Viola I part?

Both can be interpreted as evidence of an original classical scoring with two violins, which is why our editor Tobias Glöckler went for the reconstruction of this, too, in the edition. So now we are offering the quintet version in the scoring for double bass and classical string quartet. But where does that leave the Urtext? In this case, on the Internet where we shall publish the two original viola parts under www.henle.com, for the violists of this world. So our edition contains what we hope is just the ticket for every practitioner – and yet documents the source situation, as is proper for an Urtext edition.

P.S.: With our Famous Solo we are incidentally contributing as well to the rediscovery of Dragonetti’s concertante works. For, annoyingly, he is known to many only through that double-bass concerto in G major successfully attributed to him in 1925 by the bassist Edouard Nanny. But that again is another story from the wide world of the low register …