Among the just about one hundred compositions that the violin virtuoso Henry Vieuxtemps left to posterity, the 5th Violin Concerto in a minor op. 37 is certainly regarded as his by far best-known and best-loved work. It owes its popularity not only to its brilliant violin part, but also to its original form in three movements passing seamlessly without pause from one to the other. 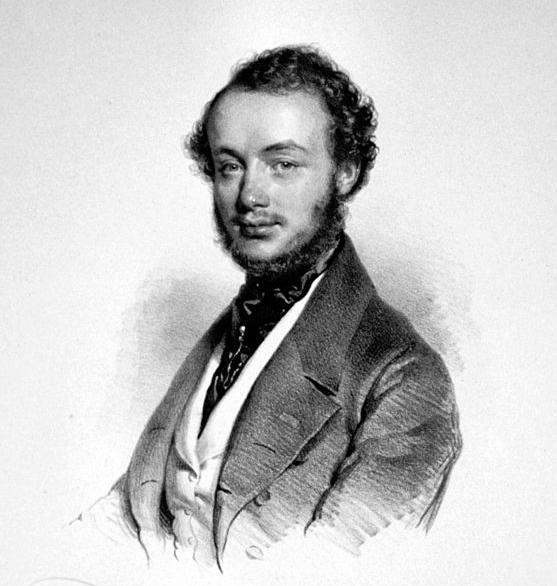 If we go more closely into the traditional sources for opus 37, we are quickly confronted with astonishing facts: On the one hand, the Bote & Bock publishing house refrained from publishing an orchestral score, printing only the orchestral parts in 1861 as well as a version for violin and piano. On the other hand, the piano part differs so substantially from the orchestral parts that it presents a version sui generis. All previous editions have uncritically reprinted this version for violin and piano, and so as a piano score for rehearsing the concerto it can be used only to a very limited extent. Our soon to be released new Urtext Edition (HN 1257) rectifies this. Available now for the first time is a “genuine” piano reduction from Johannes Umbreit who adapted the extant piano part to the orchestral parts.

But there is still more to be discovered in our new edition as we learn from the interview with Marie Cornaz and Ray Iwazumi. Marie Cornaz, who has written the preface to the edition, is the Vieuxtemps specialist from the Music Division of the Royal Library of Belgium (Brussels). Ray Iwazumi, who is responsible for editing the music text, is a violin lecturer on the faculty at The Juilliard School in New York specialising in the Franco-Belgian violin school.

Marie, what do we know about the genesis of Vieuxtemps’ 5th Violin Concerto?

MARIE CORNAZ: Vieuxtemps finished composing the 5th Violin Concerto in the spring of 1861. This famous work was first conceived as an exam piece for the students in the advanced class of the Belgian violinist Hubert Léonard at the Brussels Conservatory. Henry Vieuxtemps himself premiered the work in Brussels, first with piano accompaniment on 2 June, then with the Conservatory’s orchestra on 24 September of that year.

Ray, the concerto contains two ad libitum cadenzas, which – besides the form – is another very unusual characteristic of the work. Does this have to do with the work’s genesis? And how do the two cadenzas differ?

RAY IWAZUMI: From a practical point of view, having a choice of two cadenzas may have been intended as a feature of its purpose as a competition piece – that is, providing the students with a choice and also giving the jury the possibility of variety in listening to the contestants! Musically, however, I think the two cadenzas present a fascinating insight into Vieuxtemps’s genius. Cadenza no. 1 is constructed as a fantasy of the solo violin exposition cleverly sidestepping the themes that will return for the final movement/section, while Cadenza no. 2, by far the better known and more often played, comes across as an elaborate variation of the opening tutti exposition. Structurally, therefore, both cadenzas function for the first movement like a recapitulation and show Vieuxtemps’s flexibility and imagination in interpreting the format of the Romantic era concerto.

Marie, did both audience and critics recognise from the outset the significance of Vieuxtemps’s composition?

MARIE CORNAZ: Yes, it was at once successful. The audience was already aware of Vieuxtemps’s compositional talent thanks to the 4th Violin Concerto and was not disappointed by this new work. After the two Brussels premieres (with piano and with orchestra), critics there were also enthusiastic as well as those in other cities like Paris, where Hector Berlioz, often very critical, immediately praised the 5th Violin Concerto.

Ray, you retain in your edition the fingerings and bowings from the sources and they are used as the basis for your editorial markings in a separate violin part. Has violin technique actually remained unaltered over the past 150 years?

RAY IWAZUMI: This question properly discussed would require a lengthy discourse introducing a multitude of corollary topics. To keep it simple, I’d like to answer by saying that the violin technique called upon to play Vieuxtemps’s Concerto in a minor has probably not changed that drastically since it was written. Born of its musical demands, the Concerto makes its own technical demands. These demands are significant by any measure, were undoubtedly innovative at the time, and remain necessary elements to be learned by any virtuoso wishing to play repertory of this type. It’s one reason why this Concerto, in addition to our enjoyment of it in performance and recordings, remains part of the essential repertory at conservatories worldwide. Decisions about fingerings are in large part determined by aesthetics or physical necessity. Vieuxtemps’s fingerings are sparse but give important and wonderful clues to the music’s “design”. Since this design is enduringly valid for the composition, we’ve retained Vieuxtemps’s fingerings/bowings as part of the Urtext. By adding fingerings and a few bowings for the performance part, I’ve simply tried to help the player navigate the work in a way that respects Vieuxtemps’s suggestions. But we have to understand that there is a level of clarity and power in violin playing that we have come to appreciate today, which was either not possible owing to the technologies of instrument setup and string manufacturing, or was, from our educated guesses, simply less fashionable during Vieuxtemps’s lifetime.

Ray, while preparing the new edition you were able to discover a hitherto unknown arrangement of the first Cadenza from Vieuxtemps’s Concerto in the hand of his pupil Eugène Ysaÿe, which in the new Henle edition will be printed as a first edition in the appendix of the marked violin part. How would you characterise this arrangement?

RAY IWAZUMI: Yes, it was tremendously exciting to discover a complete working manuscript of Ysaÿe’s arrangement of Cadenza no. 1 in his collection of sketches and papers at the Conservatoire royal de Liège library! And I’m very grateful that we are able to present it to the public in our new edition. To characterise this arrangement concisely, we might aptly reflect on Carl Flesch’s comment about Ysaÿe’s playing of Vieuxtemps, that it was considered ideal in flexibility and rubato even though older listeners who knew Vieuxtemps’s playing noted that Vieuxtemps himself did not play with this type of rubato. I think Ysaÿe’s arrangement of Vieuxtemps’s Cadenza can be seen as an example demonstrating this difference. Exploring the details of what makes Ysaÿe’s arrangement with its unique approach to freedom and rubato “Ysaÿean” in style would make a fascinating extended discussion for perhaps another time! 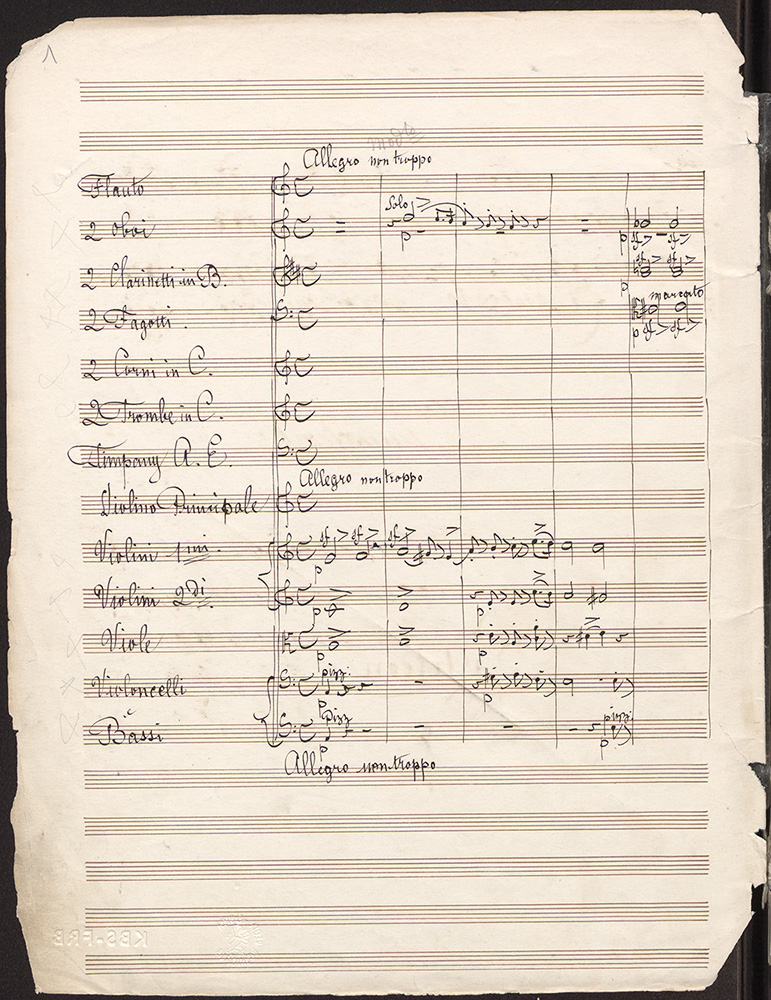 1st page of music of the autograph score

Marie, so far, notwithstanding his importance as composer, Vieuxtemps has neither a critical catalogue of his works nor a reliable edition of his letters, not to mention a current biography. What are the reasons for this?

MARIE CORNAZ: Up to 2011 the autograph score of the 5th Violin Concerto, like a lot of other manuscripts and documents, remained in Vieuxtemps’s family. This means that access to the primary sources has until recently been very difficult. Since then the Royal Library of Belgium has been preserving the necessary material in order to stimulate research on Vieuxtemps. The 67-page autograph score now in the Royal Library is probably one of the most important pieces of our Vieuxtemps collection, all at more so because his music autographs are very rare today. But the Library also owns a lot of sketches, part of the correspondence (more than 500 letters), and a wonderful album with entries by contemporary composers and musicians such as Paganini or Mendelssohn whom Vieuxtemps met in his youth.

Thank you very much for this interview.

The recording by Shlomo Mintz with the Southwest German Radio Symphony Orchestra (conductor: Myung-Whun Chung) is recommended to anyone who may now wish to listen to the piece.