Look for »Smetana From My Life - String Quartet no. 1 e minor«

Bedrich Smetana (1824–84) wrote his String Quartet no. 1 in e minor Z mého života (From My Life) in the last months of 1876, probably to coincide with the founding of the Chamber Music Society in Prague (work number Berkovec 1:105, from Jirí Berkovec, Thematic Catalog of the Works of Bedrich Smetana, manuscript, 1999). At that time, Smetana had already been completely deaf … more 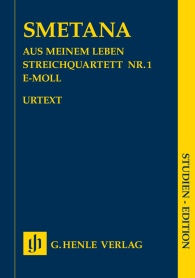