Urtext Edition, Edition for Gamba or Viola and Harpsichord, paperbound

Further editions of this title
Edition for Violoncello and Harpsichord 40.50 € Digital (tablet)

Like his father, Carl Philipp Emanuel Bach wrote three sonatas for viola da gamba. They were written during his time at the Berlin court of Frederick the Great and gave the excellent viola da gamba player in the court orchestra an opportunity to show his virtuosic ability. While the two Sonatas Wq 136 and 137 have a basso continuo, Bach followed his father’s example as far as the Sonata in g minor Wq 88 was concerned: the right and left hands of the harpsichord compete with the solo instrument in three equal parts. The original register of the viola da gamba part also permits a version for viola, a practice that has been verified in the sources of the time. This version is available in our Urtext edition as an alternative part.

The extensive chamber-musical oeuvre of Carl Philipp Emanuel Bach (1714– 88) also contains three sonatas for viola da gamba and harpsichord. Bach’s father Johann Sebastian had also produced three works in this scoring, the well-known Gamba Sonatas BWV 1027–29. But whereas they represent the obbligato type (i. e. the melody instrument and the harpsichord’s upper and … more 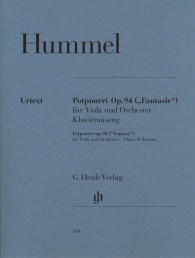