Hot-Sonata for Alto Saxophone and Piano

Erwin Schulhoff (1894–1942) was one of the most original personalities on the music scene of the early 20th century. His persecution and ostracism by the National Socialists led to his being forgotten for a time, though in recent decades the extraordinary quality of his music has been rediscovered. It was inspired by jazz, Dada, atonal music and socialist realism. Schulhoff’s Hot-Sonata of 1930 displays the influence of jazz not least through the use of the saxophone as solo instrument, but also in its pithy rhythms, its glitzy harmonies and its use of playing techniques such as glissandi. The Hot-Sonata is published here for the first-ever time in an Urtext edition. It eliminates numerous mistakes found in the first edition that had been reprinted up to the present day. All the relevant sources were consulted for this edition: the autograph, an engraver’s copy, Schulhoff’s own copy of the published work, and further personal documents such as letters and contracts. Yet the discovery in Berlin’s Radio Archive of a previously unknown transcription documenting the version of the world premiere amounts to a minor sensation. In it a number of especially high passages can be found in the saxophone part which Schulhoff later simplified for the print edition. Our edition makes this hitherto unknown first version available for the first time in an ossia staff. The saxophonist Frank Lunte from Berlin was engaged to edit this volume. He is an acknowledged expert in this repertoire and in the history of the saxophone, especially its history in 1930s Berlin.

No distribution rights for France and USA

Look for »Schulhoff Hot-Sonata for Alto Saxophone and Piano«

Arguably, no other European composer of the 1920s dedicated himself to the jazz phenomenon as consistently and passionately as the Prague-German Erwin Schul off (1894 – 1942). His intense h involvement with jazz over 13 years attests to his genuine appreciation of this rebellious cultural movement, which ori ginated in the USA and swept through Europe after the end of … more

A Bohemian composer and pianist, whose works reflect all the musical currents of his age: thus one may find jazz, trendy dances like the Charleston, neoclassicism, and Dadaism in them. He achieved great success as a concert and radio pianist. His compositional oeuvre includes stage works, songs, works for orchestra, chamber music, and piano pieces. 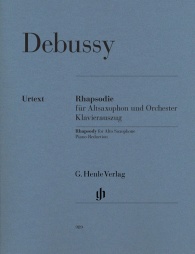 Rhapsody for Alto Saxophone and Orchestra