Carl Maria von Weber’s four piano sonatas, all composed in the decade 1812-1822, are considered the pillars of his not very extensive piano oeuvre. In these sonatas, Weber, who was one of the most renowned pianists of his era and often also improvised in his concerts, fully satisfied the expectations of the audiences of his time. Brilliant playing technique combines here with catchy melodies. The technically very demanding Sonata op. 24 in C major from 1812 brings together four different moods in its four movements. A gem is the E major Trio of the Minuet, which seems to anticipate the poetry of Mendelssohn’s “Midsummer Night’s Dream”. Besides the first edition, Weber’s autograph has been consulted for this Urtext edition. In her preface to this Urtext, editor Wiltrud Haug-Freienstein discusses interesting details concerning the sources, individual readings of the musical text and Weber’s compositional style.

Carl Maria von Weber’s four large-scale sonatas, opp. 24, 39, 49 and 70, are among the most interesting works in his not particularly voluminous output for the piano. They were written in the years from 1812 to 1822. Weber was one of the leading pianists of his day and frequently improvised during his concerts. These sonatas met the expec- IV tations of his audiences, who … more 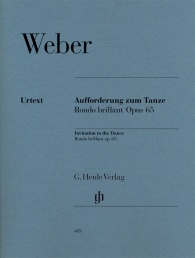 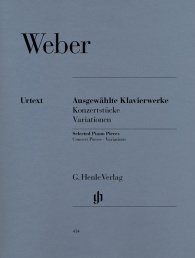