Polonaise brillante op. 3 and Duo Concertant for Piano and Violoncello

Chopin composed several works for cello, influenced by his friend the famous cellist Auguste Franchomme; the Grand Duo Concertant, an opera paraphrase on Meyerbeer’s “Robert le Diable,” is among them. Franchomme personally participated in the elaboration of the cello part. The early Polonaise op. 3 with slow introduction was written by Chopin for the cello-playing Polish Prince Radziwill;. Chopin cleverly underlays the cantabile melodies of the cello with fireworks of pianistic brilliance. A dazzling, energy-laden early masterpiece !

Look for »Chopin Polonaise brillante op. 3 and Duo Concertant for Piano and Violoncello«

The year 1829 witnessed an initial and eventful climax in the musical career of Frédéric Chopin (1810–1849). He finished his studies at Warsaw Conservatory and, in the summer, set out on a successful first journey to Vienna, where he gave concerts and established important contacts. In this period he composed not only solo piano pieces, but works for piano and orchestra … more

Once again Henle are to be applauded for their initiative, this time in bringing before the public an edition of two early and neglected works for piano and cello by Chopin. … Henle, though, have now made their own admirable contribution in helping to redress a regrettable situation.
[Music Teacher Australien, 2007] 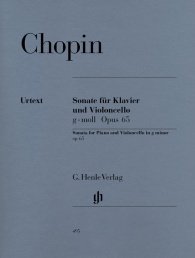