Froberger may no longer be considered the progenitor of the piano suite, but his suites for harpsichord have, without a doubt, had a considerable influence on the development of this genre. His programmatic suites, of which some bear autobiographic features, attained particular fame. Others are marked “Lamentation” or “Méditation” in view of his own imminent death. For the first time, all his suites are now being published in one volume as the Urtext - an unparalleled compendium of Froberger’s art, edited by harpsichordist Pieter Dirksen. A must, not just for fans of Froberger and harpsichordists, but also for pianists wishing to explore this repertoire on the piano.

Look for »Froberger Suites for Harpsichord«

Along with Sweelinck and Frescobaldi, he is regarded as the most important composer for the development of music for keyboard instruments in the 17th century. He studied with Frescobaldi and cultivated further the genres of keyboard music he inherited from him: toccatas, fantasias, canzonas, ricercari, capriccios He was not the inventor of the harpsichord suite (as was long assumed); rather, his suites looked to French lute music for their models. His music influenced his contemporaries and subsequent generations, including Louis Couperin, Weckmann, Kerll, Buxtehude, Johann Krieger, Pachelbel, Johann Kuhnau. During his lifetime, only two of his compositions were published; others survive in splendid autograph manuscripts or copies, and much is lost. Very little survives of his vocal works and his compositions for instrumental ensembles. 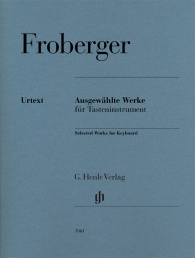