It is well known that Chopin almost exclusively wrote works for solo piano. Only for the cello did he make some exceptions: two works – a Polonaise brillante and the Duo Concertant (HN 788) were written for cello and piano, and he also let the cello express itself in his Piano Trio op. 8 (HN 1068). Finally, towards the end of his life, he honored the low-stringed instrument with a grand, four-movement Sonata in g minor. Proof that it was anything but child’s play is provided by the extensive sketch material. Chopin himself claimed: “With my cello sonata I am now satisfied and now dissatisfied. I toss it into the corner, then pick it up again.” Today we only have an inkling about this struggle. The sonata, with its famous melodic Largo movement, is now firmly embedded in the canon of cello literature.

Besides a sensitive ear to the sound of the piano, Chopin also developed a distinct predilection for the violoncello. It is therefore all the more astonishing that the instrument appears so rarely in the scoring of his works. After his early Introduction and Polonaise for piano and cello, op. 3 (1829–30), the Piano Trio, op. 8 (1828–29), and the Grand Duo Concertant in E … more 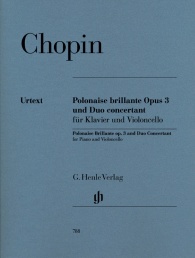 Polonaise brillante op. 3 and Duo Concertant for Piano and Violoncello