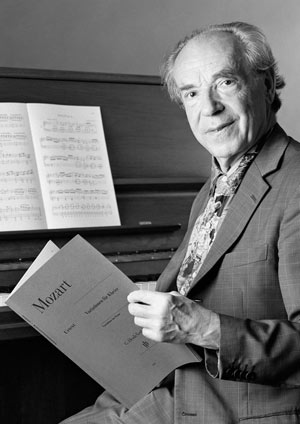 Paul Badura-Skoda (1927 – 2019) passed away at the advanced age of 91 – a superb musician and outstanding pianist, thoroughly Viennese, a passionate expert in original manuscripts and Urtext editions, as well as a connoisseur and collector of historic keyboard instruments. Our friendship goes back many years, to the 1950s, and has continued across the generations until the present day. Paul and I were still engaged in lively email correspondence a few weeks ago, discussing missing bars in the variation movement of Schubert’s Sonata in A Minor D 845 (one of the many favourite subjects that continued to fascinate him). Our archives contain numerous files of letters with Badura-Skoda, going back as far as 1956. Dr Dr Günter Henle was extremely impressed by his book Interpretations of Mozart, published in 1957, which then led to more intensive contact with Paul and Eva Badura-Skoda. Badura-Skoda always went straight to the heart of the matter, to the correct, authentic music texts. He drew from his own never-ending research as well as his amazingly reliable feel for the “textual problems” of manuscripts and his own interpretation of the sources, which was not always easy to follow. Badura-Skoda’s comprehensive knowledge as an expert in original handwritten manuscripts AND a musician enabled us to make detailed improvements to so many of our editions. I still remember very well when I was still a young editor at the publishing company, just after my PhD on Mozart, he insisted that I should take a look at the two markings of “fp” (fortepiano) in bar 19 of the C minor fantasy and place them so that the dynamics come syncopated, not “on the beat”, as did all the editions, including our original edition at the time. (“After all,” he said, “Mozart would never have placed an emphasis on the beat. How banal!”) Yet the only primary source, the first edition published by Artaria in 1785, simply didn’t allow this unusual reading, and we had to refuse his request. However, when Mozart’s original manuscript suddenly appeared in such a sensational way, it immediately became clear that Paul Badura-Skoda’s infallible intuition had been right yet again.