Wilhelm Friedemann Bach was Johann Sebastian Bach’s eldest son and more closely linked to the spirit of baroque music than were his younger brothers. In our anthology of three keyboard sonatas, two fantasias and a suite, the keyboard composer stands on the threshold of freer forms and harmonies. The Suite in G minor is still informed by the baroque. The two Sonatas in D major, with their galant, capricious idiosyncrasies, demand great attentiveness from the player, while the E flat major Sonata, published in 1748, already anticipates Haydn in the elaboration of its themes. In the Fantasias in a minor and c minor, the liberating powers of the time seem to take hold. The fingerings in the present Urtext edition are by pianist and veteran pedagogue Klaus Schilde, whose name has appeared on numerous G. Henle editions. 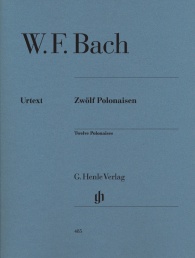