for Horn in E flat and F
with additional, marked Horn part in E flat

As if looking back on his youth toward the end of his life, Richard Strauss wrote a second concerto for horn and orchestra, again in Eb major, around sixty years after his first concerto for horn. This sublimely beautiful late work, which gives no indication of the oppressive circumstances of Strauss’ poor health and the Second World War, was premiered in 1943 by Gottfried von Freiberg under the direction of Karl Böhm. It was not until after Strauss’ death that the concerto appeared in print in London, making a critical new edition on the basis of the autograph sources and performance material more than overdue. The editor, Hans Pizka, former principal horn of the Bavarian State Opera in Munich, learned first-hand about the performance tradition and genesis of the concerto as a pupil of Gottfried von Freiberg. For use in lessons and for performances, the especially playable piano reduction by Johannes Umbreit is a great help.

The Horn Concerto no. 2 in E flat major was composed in 1942 and opened the series of late compositions which Richard Strauss (1864–1949) disdainfully referred to as “wrist exercises”. He considered his actual oeuvre to have been completed already with the 1941 opera Capriccio. All compositions that came into being thereafter – which besides the 2nd Horn Concerto … 続き 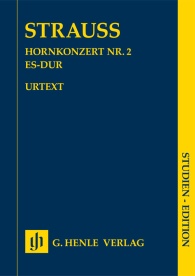