Thanks to its skilful combination of Romantic melody and sparkling virtuosity, Koussevitzky’s Double Bass Concerto op. 3 has been one of the most popular works of its genre since its Moscow premiere in 1905. No wonder, for the virtuoso double bass player Koussevitzky had composed it for his very own instrument. As early as 1906/07 a first piano reduction was published in Moscow, followed by a second in 1910 in Leipzig. However, both contain so many mistakes in the solo part that there is still uncertainty about the correct musical text in many passages to this day. The double bass player Tobias Glöckler has therefore prepared his Urtext edition using several sources: as well as the manuscript performance material and the piano reductions published during the composer’s lifetime, he has also studied recordings with Koussevitzky as soloist – thereby finally producing a thoroughly-researched Urtext edition of the orchestral score and piano reduction of this classic of the double bass literature. As with all double bass concertos published by Henle Publishers, this edition also contains the piano reduction by Christoph Sobanski in two keys (E minor and F sharp minor) for performance with solo or orchestral tuning. 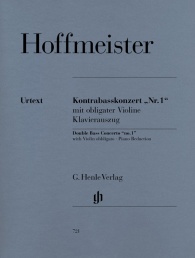