Franz Xaver Wolfgang Mozart (1791– 1844), who appeared before the public during his lifetime as “W. A. Mozart Son”, began his training as a pianist possibly as early as 1795 with Franz Xaver Duschek in Prague, but at the latest in 1798 with Johann Andreas Streicher in Vienna. He also took composition lessons with Sigismund Neukomm and Johann Georg Vogler. Following his … 続き 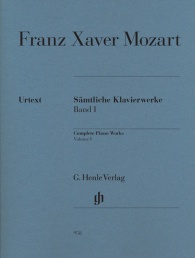