This chamber music work, composed in 1907/08, marks a turning point not only in Schönberg’s output, but also for the history of modern music in general. Major-minor tonality, obligatory for centuries, is increasingly abandoned over the four movements in favour of a free atonality. This break with music-historical tradition goes hand-in-hand with a further breach of convention; in the last two movements, Schönberg includes a solo soprano singing settings of two poems by Stefan George. With the transition to atonality, Schönberg opens the way to a new musical language which was to lead to twelve-tone music a little later. Without question, his second String Quartet represents a landmark in the history of music. The new Henle edition is edited by Schönberg specialist Ullrich Scheideler reflecting the latest state of research. 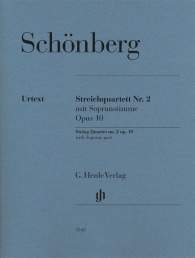