Alexander Zemlinsky’s music was long unjustly overshadowed by what was regarded as the “more progressive” Second Viennese School. Although Zemlinsky was close friends with its protagonist Arnold Schönberg, he never did take the latter’s radical step into dodecaphony. At the same time, he composed works that were no less original or fully fledged. Composed between 1913 and 1915, his Second String Quartet in particular pushed the contemporaneous understanding of form and tonality to its limits. With just one movement but spanning over 1,200 measures, this multi-faceted work numbers among the most significant contributions to the genre of the time and has long merited a critical new edition.
The Urtext edition by G. Henle Publishers corrects many errors and inaccuracies in the first edition that came to light after careful comparison with the autograph sources in Vienna and Washington. For the first time, too, the metronome markings that survive only in one of Zemlinsky’s letters have been incorporated. Editorial work was kindly supported by the Alexander Zemlinsky Endowment Fund in Vienna.

From today’s perspective, chamber music seems to play a rather subordinate role in the oeuvre of Alexander Zemlinsky (1871 – ​1942), for it is primarily his operas and large-scale orchestral and vocal works that have regained prominence after a certain period of obscurity. Moreover, the majority of Zemlinsky’s chamber music compositions fell in his early creative … 続き

One of the most important conductors and composers of opera in the first third of the twentieth century, who attained the recognition he deserved only in the 1970s. 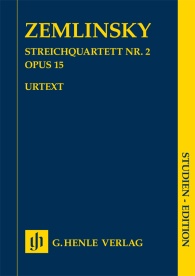