In 1849 Schumann turned to a new genre: works for piano and accompanying instrument. He showered the different wind instruments systematically with Fantasies, Romances, etc. - and always also provided an alternative part for strings. Thus Schumann also wrote an alternative part for his Adagio and Allegro op. 70 for Horn and Piano, namely for the cello. Clara played the new work together with the horn player E. Julius Schlitterlau, writing afterwards in her diary: "The piece is splendid, fresh and passionate, just as I like it!" And even Schumann admitted enthusiastically that he "had had fun with it" - which is true of many musicians even today.

In February 1849 Robert Schumann (1810–56) turned his attention to a genre that, amazingly, he had neglected until then: works for piano and solo instrument. As was typical for him, he straightaway wrote several pieces in this genre: first came the Fantasiestücke op. 73 for piano and clarinet, then, in immediate succession, the Adagio und Allegro op. 70 for piano and horn. … 계속

In keeping with Henle's reputation, this cello score is, first, an informative reference edition. The preface includes historical context for the composition and its first publication. This information is accompanied by carefully notated comments about choices made from the manuscript. ... Most important, though, is the inclusion of the original phrase markings, as they reveal the natural arch of the horn line rather than phrases hacked by edited bowings. Suggested bowings and fingerings are added cleverly and unobtrusively. With the purchase price only minimally above or equal to other publishers, this new Schumann edition is an important choice for any cellist's music library.
[Strings, 2012] 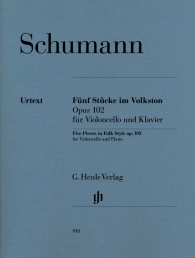