Camille Saint-Saëns composed his two Romances for Horn for two of the most respected French horn players of the time: Opus 67 in E major from 1866 is dedicated to Henri Chaussier; Opus 36 in F major from 1874 was written for Henri Garigue. Despite the illustrious recipients, they are not virtuosic showpieces but – as the term Romance suggests – short “Songs without words” that fully savour the typical romantic sound of the horn. Alongside the orchestral version, Saint-Saëns also prepared a piano accompaniment for chamber music performances. Due to the fact that they are not overly technically demanding the Romances are also suitable for advanced students.

Camille Saint-Saëns (1835–1921) wrote a great number of smaller chamber music works for many different instrumental combinations. These also include attractive recital pieces for wind instruments that had hitherto often been neglected. The two pieces presented here, the romances in F major op. 36 and in E major op. 67, were dedicated to two outstanding horn players of … 계속 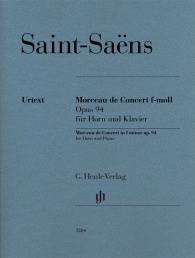