These six piano sonatas were written during the composer’s London years, after he had collected much valuable experience in Italy. The so-called “London” Bach devoted himself intensively to the possibilities afforded by the newly-developed “Hammerflügel,” and frequently performed in public on the instrument. His Sonatas opp. 5 and 17, all much esteemed by Mozart, have many characteristics of the classical piano sonata. The op. 17 collection was first published in 1774, and was already being reprinted in various countries during the composer’s lifetime.

Johann Christian Bach’s Six Sonates pour le Clavecin ou le Piano Forte (first edition), op. 17, were written during his London period. Bach, who had already achieved success in Italy as a composer of operas and church music, increasingly cultivated chamber music following his removal to London in 1762. In his piano sonatas he probed the possibilities of the newly developed … 계속 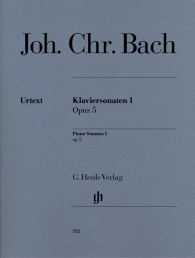