This work, in which Liszt draws on five different folk themes, is surely one of his most ingenious Hungarian Rhapsodies. It offers a unique mix of melancholy, glittering keyboard acrobatics and stormy, rousing dance. The rhapsody was dedicated to Joseph Joachim; it was so popular that the original version for piano was soon arranged for violin and piano, for piano four hands and also for orchestra. We now present the original in proven Urtext quality. As with all the other rhapsodies published to date, a preface by the Hungarian Liszt scholar Mária Eckhardt precedes the musical text.

Although the music of Liszt has been edited by some of the great pianist-composers of the twentieth century, including Ferruccio Busoni and Ignacy Jan Paderewski, any pianist interested in both the technical and musicological complexities of Liszt’s music will benefit greatly from Henle’s new edition of the Hungarian Rhapsody no. 12.
[MLA Notes, 2009] 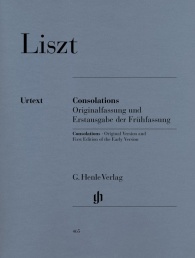