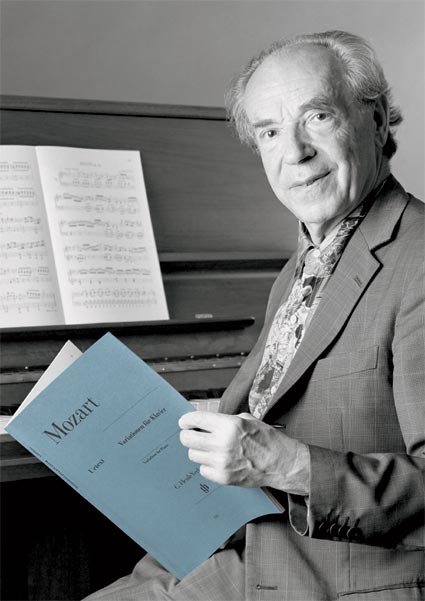 “Almost 50 years ago in a music shop I came across an unfamiliar new Urtext edition of Mozart’s piano sonatas in a modest grey colour. I bought it and was soon so delighted with it that I wrote a letter to the founder of the publishing house, Dr. Dr. Günter Henle. A friendship developed from this first contact, based on our shared love of music and the pursuit of the musical text intended by the composer. Hundreds of letters, some of which were humorous, were exchanged and we had friendly meetings face-to-face. The most important Urtext publishing house, not just as far as we pianists are concerned, grew from modest beginnings. We no longer want or are able to do without these editions. The grey, meanwhile matt shiny cover has become a signature feature. Concerning its appearance, not only does the (still hand-engraved) musical text with its clear, attractive layout captivate one but also the binding, which always makes page turning an easy matter. (How often have I been annoyed with certain other editions where the pages of music turn back on their own – awful for sightreaders!) The publishing house deserves particular praise for being interested in improvements and for correcting the few mistakes that can even occur in a good Urtext edition when reprinting. Whenever a rare autograph finally reappears on the scene, such as the Mozart Fantasy and Sonata in c minor, it is even re-engraved.
Wishes? To begin with I hope that the publishing house can spread further and grow even more. Hopefully it will also include Mozart’s piano concertos in its publishing programme. My particular wishes are as follows: