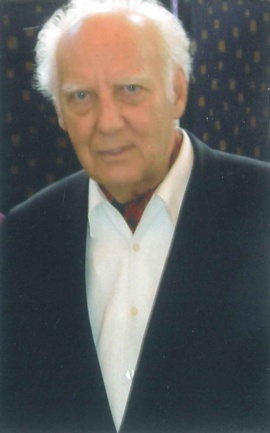 Prof. Dr. Emil Platen, born in 1925 in Düsseldorf, did his school-leaving certificate in April 1946 after have done fatigue duty and military service in the Navy. He began studying musicology at the University of Cologne for two semesters, before changing to viola, composition (with Wilhelm Maler) and choral direction (with Kurt Thomas) at the Music Academy in Detmold. Following his exam as a choral director (1950) he continued his studies of musicology and in 1957 received his doctorate from the University of Bonn with a thesis entitled “Chorische Choralbearbeitungen von Johann Sebastian Bach”.

He spent several years working as a research associate at the Beethoven-Archiv in Bonn. As a “lecturer for practical music”, he was then put in charge of Bonn University’s musical activities, and became the university’s musical director in 1963. He was appointed an Honorary Professor for Musicology in 1971. Alongside his work with different student ensembles, he also did musicological work, both as a teacher and a scholar. Platen’s interests were the music of Bach and Beethoven as well as questions of structure in music. Since becoming an emeritus professor in 1990, he has devoted himself more intensively to editorial projects, in particular Beethoven’s late quartets. In all of this, his particular interest is the direct relationship between his academic work and musical practice.

Duet with two Obligato Eyeglasses WoO 32 for Viola and Violoncello

The String Quartets - 7 Volumes in a Slipcase