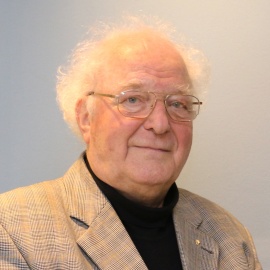 Peter Damm was born in 1937 in Meiningen (Thuringia). After studying at the Hochschule für Mus-ik in Weimar between 1951-1957 under Professor Karl Biehlig, he began his musical career in 1957 as solo hornist with the orchestra of Gera (Orchester der Bühnen der Stadt Gera). Two years later he became principal horn of the Gewandhaus Orchestra Leipzig, a position he held until 1969. From 1969 to 2002 Peter Damm was principal horn with the Dresden State Orchestra (Staatskapelle). On his retirement the orchestra made him an Honorary Member. Other titles con-ferred upon him include that of Kammermusiker (Chamber musician) in 1967 and Kammervirtuose (Chamber virtuoso) in 1971.

Alongside his orchestra work, Peter Damm also taught at the “Carl Maria von Weber” Conservato-ry in Dresden, as well as giving international masterclasses and running workshops in Europe, Ja-pan and the United States. He has performed as soloist and chamber musician in almost all Euro-pean countries, as well as in North and South America and Japan.

Between 1986 and 2018 Peter Damm was President of the International Competition for Wind Instruments in Markneukirchen (Saxony). He is an Honorary Member of the International Horn Society, of the Bavarian Horn Society and the Mozart Society in Saxony. Peter Damm has received numerous prizes and awards. His artistic prowess has been documented on many recordings and through radio broadcasts. His extensive repertoire covers solo, chamber music and concert litera-ture from the 18th century up to and including contemporary music.

After the opening concert of the International Horn Symposium in La-Chaux-de-Fonds (Switzerland) in 2007, Peter Damm retired from the concert podium, also as a soloist. Since then he has dedi-cated himself to many diverse enterprises: scholarly research into Richard Strauss’ horn concertos, where the investigation into the sources is sometimes similar to detective work, tracing and edit-ing rare literature for the horn, and arrangements for horn ensembles.