To celebrate Froberger’s 400th birthday in 2016, we are presenting an attractive, handy volume containing four works from his pen. A toccata, a fantasia, and a canzona invite us on a musical journey of discovery into his early-Baroque musical world. The volume concludes with his well-known variations “auff die Mayerin”, a work that has enabled Froberger’s music to succeed in enthusing pianists as well as harpsichordists of our time. Edited by Froberger expert Peter Wollny, this Henle edition will leave no wishes unfulfilled!

In the history of music for keyboard instruments, and particularly in the development of the genres of suite and toccata, the imperial court organist Johann Jakob Froberger (1616 – 67) is among the outstanding figures of his time. He was born in Stuttgart in 1616, and was trained at the Viennese court and by Girolamo Frescobaldi in Rome. His playing and his compositions … more

Along with Sweelinck and Frescobaldi, he is regarded as the most important composer for the development of music for keyboard instruments in the 17th century. He studied with Frescobaldi and cultivated further the genres of keyboard music he inherited from him: toccatas, fantasias, canzonas, ricercari, capriccios He was not the inventor of the harpsichord suite (as was long assumed); rather, his suites looked to French lute music for their models. His music influenced his contemporaries and subsequent generations, including Louis Couperin, Weckmann, Kerll, Buxtehude, Johann Krieger, Pachelbel, Johann Kuhnau. During his lifetime, only two of his compositions were published; others survive in splendid autograph manuscripts or copies, and much is lost. Very little survives of his vocal works and his compositions for instrumental ensembles.

The volume provides a very useful introduction to the different styles employed by Froberger for someone approaching his music for the first time. It is presented in clear printing. [Harpsichord & Fortepiano, 2017] 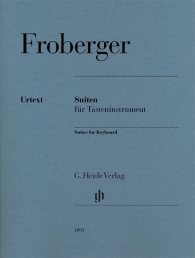