with Urtext and Bärmann parts

Now the Concertino and the First Clarinet Concerto are about to be followed by Weber’s Second Concerto in E-flat major, edited by Norbert Gertsch. Once again, the piano reduction contrasts the original solo part with the widely known version by Carl Bärmann (both parts are separately enclosed). The accompanying preface offers a detailed explanation of the importance of both versions and how they interrelate.

available
with Urtext and Bärmann parts

Carl Maria von Weber produced three works for clarinet and orchestra: the Concertino, op. 26, and the concertos in F minor, op. 73, and E-flat major, op. 74. 4. All three were written during a lengthy visit to Munich in 1811. The twenty-four-year-old composer, still many years away from his triumphant breakthrough with Der Freischütz in 1821, had been traveling through Germany … more

Henle fans might also want to look at their edition of the Weber Concerto No 2 (op. 74). ... The piano part shows both versions. It is also interesting to note how it differs from other publications on the market that lack Henle's research.
[Music Teacher, 2004] 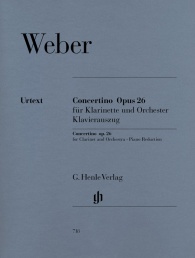 Concertino op. 26 for Clarinet and Orchestra