Janáček’s poetic cycle “On an overgrown path” is surely among his most popular piano works. Its evocative musical language will draw every hearer under its spell. Listeners will not be able to discern that the pieces had a very complex and protracted genesis, with some originally intended for harmonium. With exemplary clarity, the accompanying texts in Henle’s Urtext edition shed light on the complicated source situation. In addition, an appendix to the musical text contains those pieces that Janaček either did not include in the cycle, or that remained unfinished. The world’s foremost Janaček researcher, Jiří Zahrádka, is responsible for the edition, while the fingering is by the great pianist Lars Vogt.

Look for »Janácek On an Overgrown Path«

Leoš Janáček (1854 – 1928) was not an especially prolific composer of piano music, despite devoting much time to playing the instrument during his youth. With a few exceptions – the Thema con variazioni (1880) and the brief Vzpomínka (Reminiscence; 1928) – all his piano works were written in the short period 1900 – 1912: Po zarostlém chodníčku (On an overgrown … more 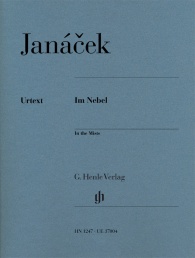