with marked and unmarked string part No distribution rights for Mexico

Richard Strauss (1864 – 1949) composed the first version of his only Sonata for violoncello and piano op. 6 in F major, in the spring of 1881. Its three movements are dated 5 March, 12 March and 5 May 1881 in the first draft. Strauss made a fair copy of this draft, presumably to enter it into a competition for new cello works in which a prize was to be awarded for the best … more 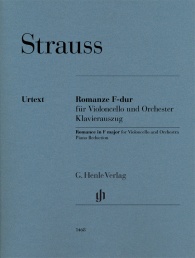