Posted on November 30, 2011 by Norbert Müllemann

Frédéric Chopin (1810–1849) sometimes drove his publishers to despair. In 1833 Maurice Schlesinger wrote in a more or less calm manner to his colleague Friedrich Kistner in Leipzig:

“Chopin is not only a man of talent but he is keen to maintain his reputation so he continues to polish his works long after they have been finished; all that he has sold to us is finished, I have had it in my hands several times but there is a difference with him between finished and delivered”.

“Only today I received the first proofs from Chopin of the first six Etudes, full of mistakes; he is so anxious that it is difficult to receive anything from him”.

Chopin obviously found it difficult to hand over a work and to give it a final form for publication. A good example of this is the ending of the second Ballade. It is astonishing how many times he changed the final two measures of the work. The question of how to bring a work to a harmonious conclusion that was marked by such extreme opposites apparently caused him quite a headache.

The work alternates between folksong-like passages in F major and dramatic outbursts in a minor. Chopin was probably not sure whether he should end it with a simple cadence or whether to give the ending more weight.

The passage is as follows in the autograph: 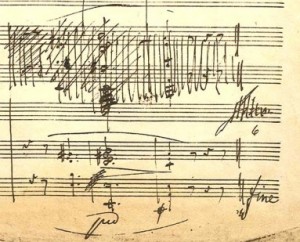 Originally Chopin intended version 1 (see below for the musical examples). Yet he discarded it, creating a simpler version, number 2.

Everything would have been clear if Chopin had not later returned to his original ending. In the copy of the autograph, which was the model for the German first edition, Chopin himself changed the simple cadence 2 to version 3 (engraver’s error C1 instead of E1). This is the ending that is still today given in the editions by Herrmann Scholtz (Peters) and Ignaz Jan Paderewski (PWM). The French first edition contained the simple ending from the autograph (2). In a later issue, however, Chopin corrected it to version 4. This is the ending in the edition by Karol Mikuli, which is often used by pianists today. (Mikuli added A1 in the bass in the last measure). 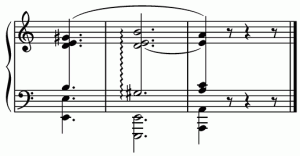 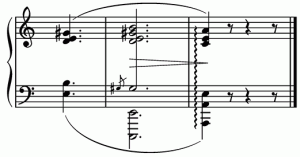 Versions 3 and 4 were both printed during Chopin’s lifetime and with his approval. So both of them are “right” to a certain extent. Yet version 4 is Chopin’s last word on the ending of the second Ballade.

However, the second Ballade can either close with version 3 or 4. This situation is typical of Chopin: Even if at first sight it appears to be an accident in the transmission history, this is not the case. To a certain extent Chopin accepted alternatives. Highlighting these alternatives as opposed to allowing arbitrariness is what a Chopin Urtext Edition has to do.