Descriptions of musical instruments in older musical prints and manuscripts are often very individual and can give rise to speculation. For example, what exactly is meant by the term “alta viola” – a normal viola or a different instrument?

In 1798 the young Johann Nepomuk Hummel published his Opus 5, three sonatas for piano with obligato string accompaniment: the first two pieces were with violin, the last, however, with a – well did he actually mean a viola? The term “alta viola” on the title page of the first edition (see picture) might lead one to believe that a certain subspecies of viola was intended, maybe with a particularly small body or with the strings tuned higher. 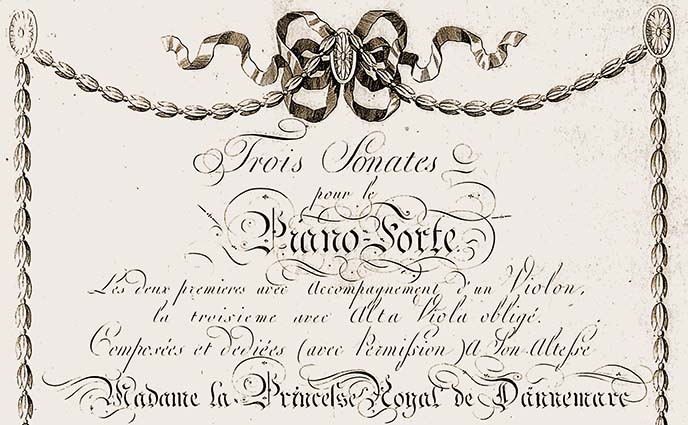 In the 18th century we know of individual attempts by instrument makers to “upgrade” the hitherto rather neglected viola, allowing more soloistic and virtuosic opportunities. Thus around 1800 the French violinist and composer Michel Woldemar wrote a concerto for a five stringed “violon alto”, basically a viola with an added high e’’ string. Joseph Nicolas made a particularly fancy double “alto violon” that can be seen in the Musical Instrument Museum in Paris. A much later invention was Hermann Ritter’s “viola alta”, made in the 1870s: this has an especially large scaling and was highly valued by Richard Wagner on account of its full and sonorous sound.

All in all, these are actually just single examples that have had little or no impact on general musical practice. Thus the term “alta viola” on the title page of Hummel’s sonatas could be simply explained by a lack of knowledge of French (as one can see from the numerous other spelling and grammatical mistakes on the title page shown).

On title pages from this time it very often says “alto viola”, a simple combination of the French and Italian instrument names. For instance the viola concertos by Carl Stamitz (see our edition HN 758), Ignaz Pleyel or Carl Maria von Weber all have the double term “pour l’Alto Viola Principale” in the title. Thus Hummel’s sonata can and may be played on a normal viola …

Mozart also does it: describing the viola as “Alto Viola”