Posted on January 23, 2012 by Norbert Müllemann

Mystery swirls around Chopin’s Mazurka in f minor, op. post. 68, No. 4. Is this really the ‘Master’s last inspiration’? How could it be otherwise? Poor ailing Chopin’s approaching death in 1849 drove him to that kind of grim, despairing music language. That’s what many Chopin lovers imagined in the 19th century. And yet Jeffrey Kallberg, the American Chopin expert, speculated that the work actually originated in 1845/1846 (see Chopin’s Last Style, in: Chopin at the Boundaries. Sex, History, and Musical Genre, Cambridge/Mass., London, 1996).

Perhaps even more amazing is why two editions of the work differ in length by some 40 measures? One edition by the Polish Chopin expert Jan Ekier is 101 measures long (Warsaw, PWM 1965) – the G. Henle Urtext Edition has only 62 measures (Munich 1975/2003).

Many recordings of the work are obviously also based on various music texts. On youtube I found recordings by Vladimir Ashkenazy, Grigory Sokolov and Evgeny Kissin.

What is it about this fascinating piece of music? Well, a glance at the only authentic source in existence is enough. You will instantly understand that this sketch – it is, incidentally, not dated – poses questions: 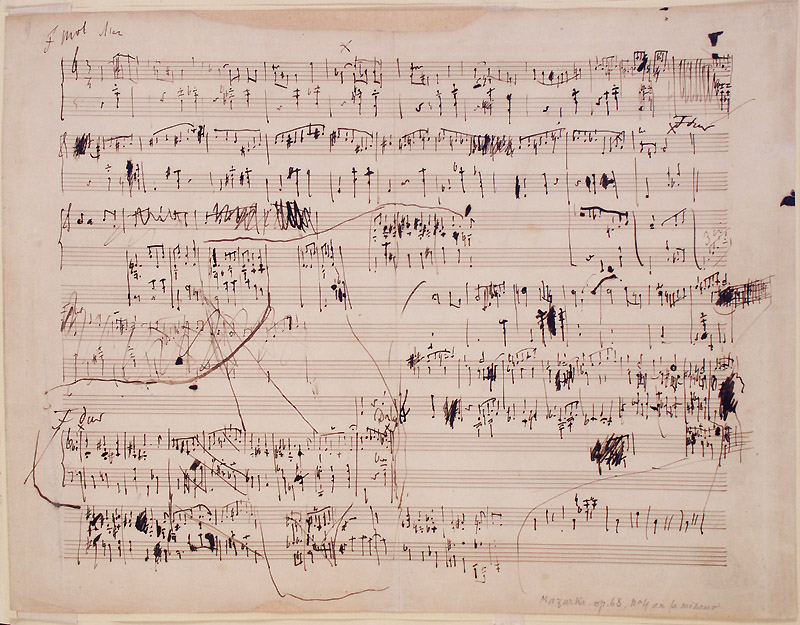 The cellist Auguste Franchomme, Chopin’s close friend in his last years, was the first to try to cut through the chaos in this sketch. In 1852 he transcribed it into a music text that could be performed and first got the idea going that it was composed in 1849. Julian Fontana, another close friend, published a new transcription in 1855/1856 that quickly became known. At the bottom of the 1st page he left the following commentary: ‘This Mazurka is the last inspiration that Chopin penned on paper, only a short time before his death; he was already too sick to try it at the piano.’

Ever since, it is this version of the work, along with its generally accepted emotional depths, that the Chopin community has come to know. It wasn’t until 1951 that Arthur Hedley re-discovered the sketch, compared it with Fontana’s version and noticed that parts of the music notated there were missing. Prompted by Hedley, anyone in Chopin research who was anybody was now trying to put the mazurka puzzle together into a seamless whole – an effort that seems to be doomed to failure.

The key to the f-minor Mazurka is to concede that it is not a finished work. Kallberg suggests that it is a compositional attempt that Chopin discarded again – and in fact, while preparing his Mazurka Op. 63 in 1845/1846. Therefore, op. 63 No. 2, a work also in f minor, would have replaced our sketched mazurka. And with that, the words ‘Master’s last inspiration’ would be purely fiction.

But wait, don’t turn away disappointed! The aura of the piece may be a sham – the fascination of the music remains. How close the well-known reconstructions come to Chopin’s intentions must remain open. It is, though, absolutely legitimate for Henle to publish the Franchomme version, and for Ekier, his own. You’re not convinced?  Then try to make your own version!