Posted on February 6, 2012 by Annette Oppermann

Wouldn’t you wonder, too, if you saw a sextet on a concert programme, and then seven musicians came out on the stage? That’s exactly what happens to many people when they open our Urtext edition of Beethoven’s Sextet op. 81b for 2 Horns and Strings (HN 955). For here besides the horn parts they find not four but five string parts – and with good reason: That’s because of the 1810 first edition of the sextet published in Bonn by Beethoven’s friend and publisher Nikolaus Simrock. In the title the lowest string part is not only described as ‘Violoncello e Basso’, but this scoring is also clearly differentiated by alternately specifying ‘Vllo.’ (for cello alone) and ‘Bassi’ (meaning cello and contrabass).

Here and there in the edition the seventh instrument reinforces the lowest part of the sextet. This was not yet the case, though, in a copy that Beethoven himself checked and corrected. In this copy now preserved in the Bonn Beethoven-Haus, the sextet has only six parts. The lowest part is simply indicated as ‘Violoncello’ and does not in any way suggest using a contrabass. 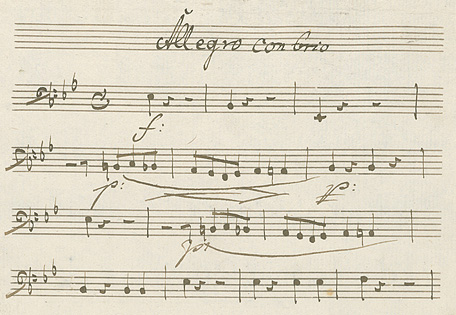 So now we are once more left with the teasing question: What did Beethoven really want? Since we are missing an autograph or any other sources for this work, we must, in the truest sense of the word, ‘read’ the answer from the score – and that is just what the editor Egon Voss has done. A detailed comparison of the printed text with the copy shows that the copy was indeed the model for Simrock’s edition. There are still, however, some small changes in pitch or allocation of parts that very likely no one else but Beethoven could have introduced. Consequently, there is no reason to suppose that Beethoven did not authorize including a contrabass in this edition – even if, for a start, the idea of a sextet for seven instruments takes some getting used to.

This was not quite so, though, in Beethoven’s time. For it was quite common in the 18th century to put cello and contrabass together in wind chamber music with mixed instrumentation. We are familiar with a similar sound from the divertimenti of Mozart or Haydn. Beethoven, though? Yes, even Beethoven, because regardless of the high opus number 81b, this sextet belongs to his early works. It was composed as far back as the start of the 1790s and is clearly oriented toward the court musical taste in Bonn where Beethoven was at the time.

In a way, therefore, opus 81b is an ‘old-fashioned’ work.  So we should not be surprised that it sounds somewhat more ‘old-fashioned’ than the chamber music of the later Viennese period that we associate with Beethoven.  And perhaps this is the reason why the scoring with contrabass disappeared sometime after Beethoven’s death.  By 1846 the first printed score was published without indicating ‘Vc’ and ‘Bassi’.  All later editions were to follow this model until 2007 when Egon Voss put the work to the editorial acid test during the preparation of the volume of wind chamber music for the New Beethoven Complete Edition.

Incidentally, in a live recording from a Beethoven-Haus concert in Bonn, you can hear how musically convincing his reading of the sextet for seven parts is, as based on the first edition. It was put to the test there, so to speak, by presenting opus 81b in both variants.

The contrabass sounding an octave lower than the cello makes for a stronger foundation to the string scoring in such a way that a satisfying counterbalance to the pair of horns is established (although the natural horns used at that time did not approach the same sound volume as our modern valve horns). And since the horn parts of the sextet are written to be very virtuosic, we may now feel that in this scoring we are hearing what is virtually a small concertino for 2 horns and strings.

So, with Beethoven there may comfortably be a bit more bass.  And to keep contrabassists from dislocating their necks when playing with cellists at the same stand, we have just equipped our edition of the sextet with a separate seventh part. Well, strictly speaking, there are nine even, because in addition to the horn parts in E flat we are also offering both these parts transposed for horn in F, but that again is another story …