Posted on March 5, 2012 by Wolf-Dieter Seiffert

Very vividly I recall the Mozart sensation of the year 1990: In Philadelphia a librarian discovered a Mozart autograph while dusting. Not ‘just any old one’, but Mozart’s complete manuscript of his certainly most important Piano Sonata (C minor K. 457 with Fantasy K. 475). In 1990/91 the manuscript came by way of Sotheby’s into the possession of the Internationale Stiftung Mozarteum where it has ever since formed the most important piece of the autograph collection. Furthermore, brought out at that time was a beautiful facsimile edition of the complete manuscript, alas out of print today. 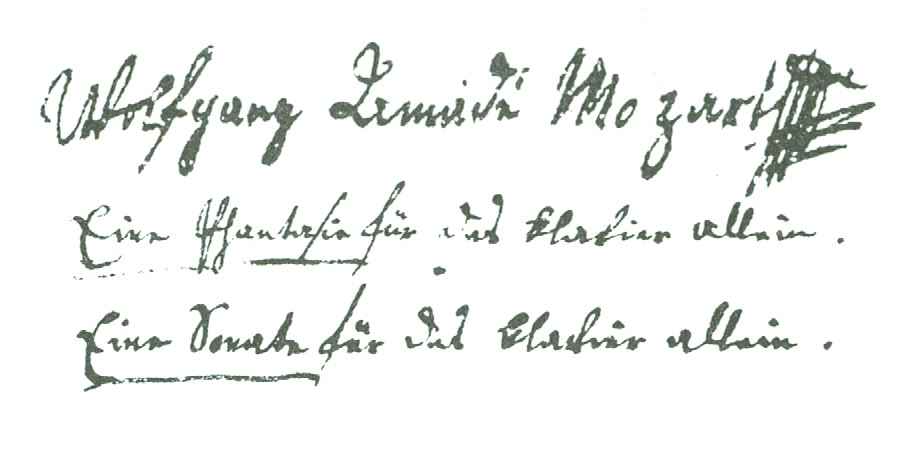 In those days I had just started as editor at the G. Henle publishing house and was faced, together with the editor Dr Ernst Herttrich, with the delightful task of reviewing our music text aided by this previously lost, truly first-rate source. Our music text was then based primarily on the first edition of 1785 (published by the Artaria publishers in Vienna).

You will now probably be asking yourself: What so special will come out of such a comparison? This work in autograph will not after all present a text essentially other than that of the first edition, especially if Mozart had indeed authorized this ‘original print’? I cannot answer you with a percentage number, but believe me, for more than 200 years pianists have had to make do with a music text not 100% correct. Just because up to then one of the most important sources had been lost.

News to me, as I then promptly learned, was that ‘Urtext’ does not – as I had assumed – mean a music text valid for always and evermore. On the contrary, responsible ‘Urtext’ treatment means consistently searching for and utilizing all opportunities to optimize the text. That is the declared principal goal of the G. Henle publishers. If, for example, a first-rate source unexpectedly turns up from the depths of its transmittal stages, then as with Mozart’s autograph, the existing Urtext must be compared with the new source, revised and, if necessary, printed anew. It was incidentally also part of my first experiences to learn that most other publishing houses did not think and act this way: In the music trade no notice was taken of the sensational K. 457/475 source and its critical value. The inferior text has since been reprinted again and again…

The first edition of K. 457/475 actually does contain a few mistakes in the notes that Mozart did not notice, together with inaccuracies in dynamics and articulation. ‘This new source situation did not occasion crucial changes to the musical text’ (that’s what the preface of our revised edition of Fantasy and Sonata in C minor,
HN 345, states). It took only one printed page to compile all the interesting points in the new Henle Urtext. So granted, no ‘new Mozart’ emerges from such a revision. But in the details, anyway, unquestionably a better because more correct Mozart.

Let me single out specifically just one of our improved passages. I’ll pick here measure 51 of the slow movement. A particularly fascinating passage first of all, because it has not been pointed out and commented on in any other existing Mozart edition (not even in the excellent critical report of the New Mozart Edition), and secondly, because in the narrow sense it does not even represent an error correction, but instead the model example of a conflict of variants.

This is that striking passage in the closing section (epilogue) of the slow movement where after a rapidly descending E-flat scale from the climax tone b-flat2, the music carries on very low down into the bass region:

In Mozart’s manuscript it appears as follows: 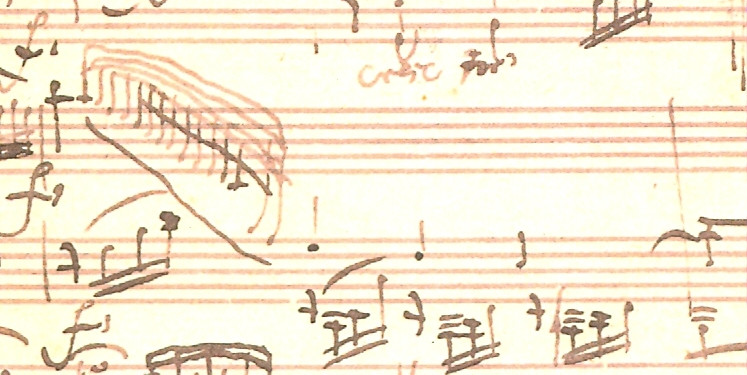 It’s all about the left hand, more precisely, about the fourth from last 16th note. In Mozart’s autograph it reads F and not A flat. This F is found in all Mozart editions. It is already present in the first edition of 1785. Why then does the new Henle Urtext edition have A flat (with a footnote to explain the passage)?

A particular fascination in the autograph of the C-minor Sonata K. 457 is the fact that Mozart notated the slow movement twice, actually even three times (which of course we did not know before the manuscript showed up). He at first wrote the E-flat major Adagio in an unornamented, but still fully valid version, in which he indicated the two theme reprises (mm. 18–25 and 41–48) only as ‘Da Capo’ [thus, in both places mm. 1–8 are to be repeated literally tone-for-tone]. Thereupon, follow the epilogue measures 49 to the end.

And in this first version of the epilogue is A flat at the place in question, instead of F: 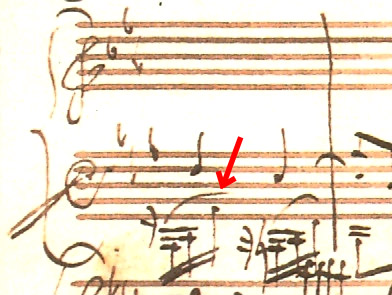 Later Mozart notated both theme reprises in an ornamented second version. (Incidentally, this highly interesting ornamented intermediate stage has not been reprinted up to the present in any music edition of the C-minor Sonata). Mozart research assumes with good reason that this version (on an extra page [= 15 in the facsimile mentioned above]) had been written down as an exercise study for Mozart’s piano pupil Therese von Trattner (1758–1793), so that she could learn to skilfully apply improvised ornamentation (and varied dynamics). The sonata is dedicated to Therese von Trattner, as we can gather from the title page of the first edition and from a copyist’s copy. Found in this copyist’s manuscript are not only revision entries in Mozart’s hand, but also his own autograph dedication on the title page: 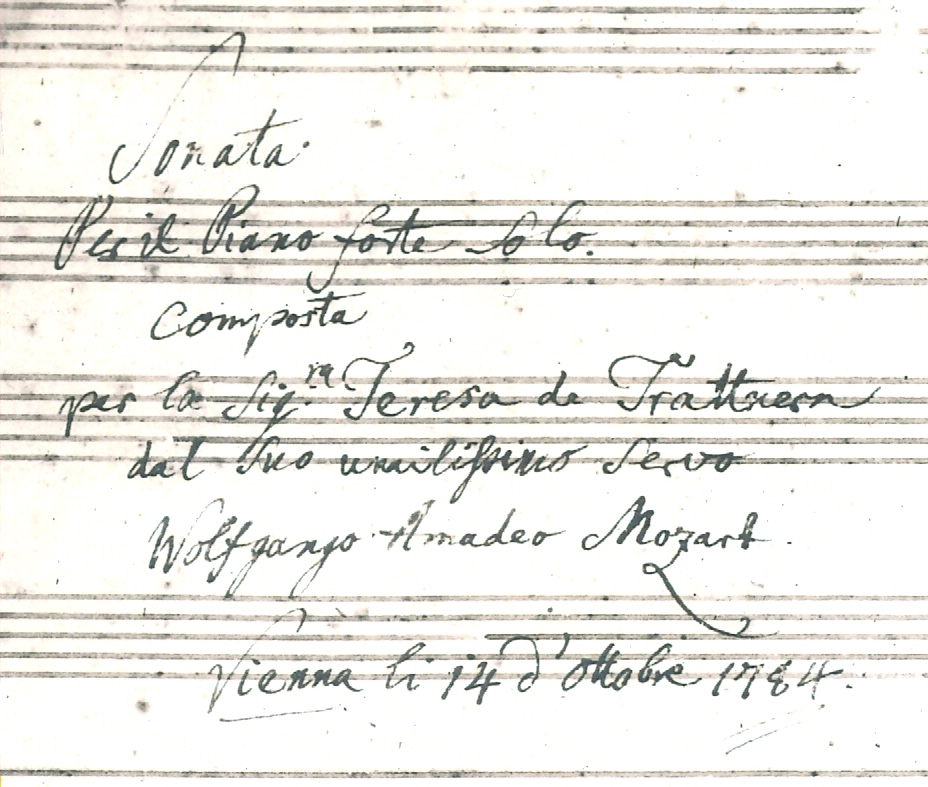 The music text of the copyist’s manuscript faithfully follows the (unornamented) original version. At our passage in question is again, as expected, the A flat.

To summarize the contradictory readings of measure 51, fourth from last note, left hand:

If we were to compare the case with a lawsuit, prevailing would be a deadlock, because we are confronted with two contrary statements: F or A flat – a case for the judge. Let’s hear the summation.

Pro F: In evaluating the sources we must consider that Mozart not only notated the F chronologically later than the A flat – thus perhaps expressing his ‘final will’ in this passage –, but also left the F still standing unchanged upon proofreading the first edition. Furthermore, in musical respects not even a thing can be said against the F; it conforms to the rules of composition and does not sound wrong.

Pro A flat: The A flat is considered the better tone on purely musical grounds, because with the F arises a sonorously ugly doubling with the quarter note f of the right hand. The A flat is also more logical with respect to voice-progression, because it consistently continues the chord structure of the previous chord (C+E flat +c → A flat +C+a flat instead of: A flat +C+f). With all ornamented variants Mozart has had the right hand exclusively in mind, the left hand remains (almost entirely) totally unchanged. Why should Mozart thus later intentionally modify the musically good original A flat to a musically inferior F, and at that, in the ‘unimportant’ left hand? He taught his pupil Trattner from the dedication copy, in which he did not correct, for instance, the A flat to F (but instead another music passage). Mozart can easily have made a slip of the pen (mistaken third) in the newly written version (version three) in measure 51, which then inevitably made its way into the printed music text of the first edition (and from there into all music volumes for the last 200 years). We know that Mozart never or only rarely ever read proof, which is why it is understandable that he did not arrange for any corrections in the plates before publication. The first edition contains in addition some other, even more obvious, uncorrected engraving errors, proving that he did not proofread K. 457/475.

The editor of the Henle Urtext editions (functioning as ‘judge’) has decided for the A flat. But, users of our edition can form their own opinions, hence the added explanatory footnote. The conflict in readings caused by Mozart himself showed up as a problem only after Mozart’s manuscript was recovered again in 1990 from its sleeping-beauty slumber under the layer of dust. The conflict and its discussion enrich the Urtext and by association also every interested musician.

Postscript: To mark the publication in spring 2012 of all 18 of Mozart’s sonatas in inexpensive separate editions, we have compiled an extensive special contribution with valuable information on Mozart’s sonatas (among other things, fascinating YouTube links for each sonata), see www.henle.de/mozart-piano-sonatas.

3 Responses to »How an original Mozart A flat escaped from the dust. On the slow movement of the C- minor Piano Sonata K. 457«