It’s still ringing in your ears, this warhorse for orchestra or for a pianist. Doesn’t it – when convincingly interpreted – almost drive you crazy with its wild, diabolical tempo, its sensual surge in the slow middle part? And now honestly, for once: Can you even whistle a tune from Liszt’s Faust symphony?

Over and over again it’s amazing what in a composer’s work posterity picks out as worth hanging on to and then in the universal canon that everybody knows what gets passed over. For Liszt himself the ‘Two Episodes from Lenau’s Faust’, the second being the Mephisto Waltz, were only a ‘dessert’ or an ‘accessory’ (thus, Liszt verbatim in letters to his publisher Schuberth) for his Faust Symphony, generally acclaimed as his orchestral Magnum Opus. But neither the Faust Symphony nor the first episode ‘The Procession by Night’ – maybe it is familiar to you? – can today touch the popularity of the waltz. – Liszt, incidentally, still wrote three more Mephisto waltzes and a Mephisto polka … 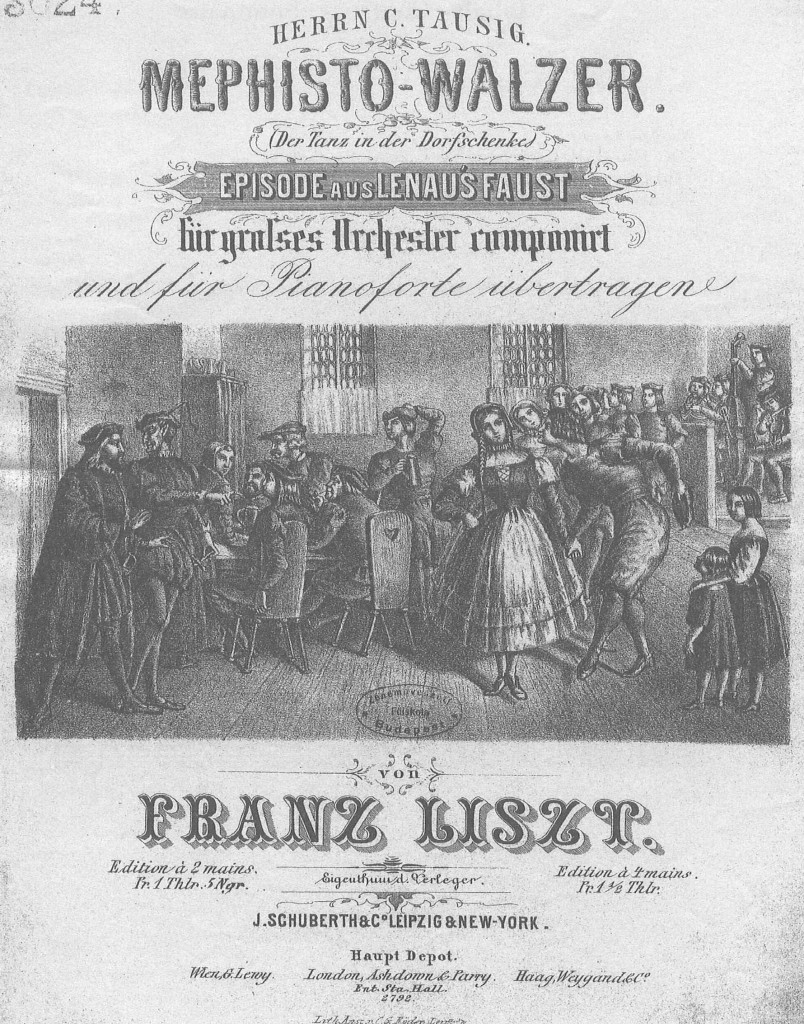 Title page of the first edition of 1862

As is to be expected with Liszt, the world champion of arrangers, the Mephisto Waltz ‘No. 1’ appeared simultaneously in several settings, for orchestra, for piano solo and for piano four hands. To this list the publishing house later added an arrangement for two pianos by another arranger. But Liszt famously not only did a lot of arranging but also a lot of reworking. In the case of the Mephisto Waltz there exists, for example, an optional conclusion for the orchestral version. Afterwards curiously enough, Liszt also later arranged it for piano duet, but probably did not consider it for the piano-solo version. (Even the composer himself had most likely lost track of the multitude of arrangements!)

But now then we should mention here a reworking of the waltz that perhaps will yet provoke a frown from one or the other of you. When the piece was published in the Liszt Complete Edition by the Hungarian publishing house Editio Musica Budapest in 1982, it was accompanied by two generally alleged insertions for the Mephisto Waltz for piano solo (both can also be found in the edition by Leslie Howard in 2007 for Edition Peters). The music text of these ‘insertions’ dates back to an autograph music leaf preserved in the Goethe-Schiller Archives in Weimar. The first section notated there consists of 30 measures and was interpreted as an alternative transition to the slow middle part. On the other hand, in the second section there were 122 new measures for the middle part, with a new transition to the Presto. (I am sparing you here the exact details which you can look up in the preface to our edition.)

Overlooked in the case of this analysis, though, was a crucial note by the curator of the Weimar Liszt Museum, Peter Raabe, on the wrapper in which the music leaf has come down to us. It says there: ‘the enclosed variant for the Mephisto Waltz is the property of the Baroness Meyendorff. To be returned in the spring of 1914. Relates to the old Schuberth edition of the 1st Mephisto Waltz. The first part is the opening, then to be continued from p. 11 (so the first 10 pages are to be left out). The second passage refers to p.13.’ Raabe’s construction of this ‘variant’ of the waltz should be taken literally: The first notation on the autograph music leaf is an optional start to the piece, then follow pp. 11 to 13 of the Schuberth first edition (the connecting passages are unambiguous); the piece then ends with the second section on the autograph music leaf. You can view the reconstruction on our website in the ‘Look Inside’ file for the Urtext edition.

But what has now become of the famous Mephisto Waltz? From what we know today, Baroness von Meyendorff, Liszt’s long-standing confidante, was a good pianist. Liszt composed several smaller pieces for her and this arrangement of the Mephisto Waltz was probably also done for her private use. All the virtuoso passages were radically shortened so that the music concentrates on the infatuated middle part now enlarged. Even the Presto insertions in the middle part are eliminated, as well as the difficult repeated notes – there no longer exists a single sixteenth note in the music. Mephisto and his wild dance were surgically removed from this waltz – what remains is Faust’s courting of the brunette girl out of Lenau’s poem.

The Mephisto Waltz that ‘everybody’ can manage on the piano – does it still deserve its name?