‘I am currently making a recording of Schubert’s Arpeggione Sonata [a minor, D 821] with Kirill Gerstein and am playing from the wonderful Henle edition. In comparing it with the autograph [Paris], I notice that at the beginning of the third movement the accents in the piano part seem to be on the first beat and not syncopated as in the Henle edition. At least in the case of the first two measures I would find it just more visually convincing if the accent were on the first beat … What do you think?’

Tabea Zimmermann’s question is of general relevance because Schubert’s notation of accents is often misunderstood. Here in Schubert’s manuscript is the passage in question: 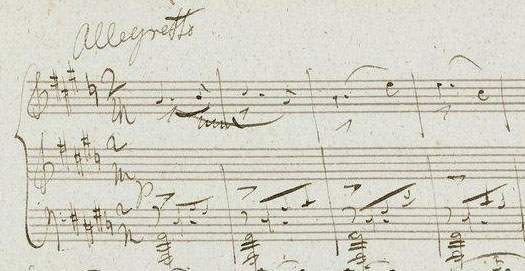 In Schubert’s autograph it might actually look at first as if the accents in the solo part and the piano part were more or less underneath each other, that is, absolutely on the first beat. But I am positive that the two parts are clearly written and meant to be out of sync in this passage (and with it the character of the theme altogether). But instead they are meant to convey what is in my edition:  in the right hand of the piano the accent is always on the 2nd eighth note; in the viola part, however, it is on the first beat. 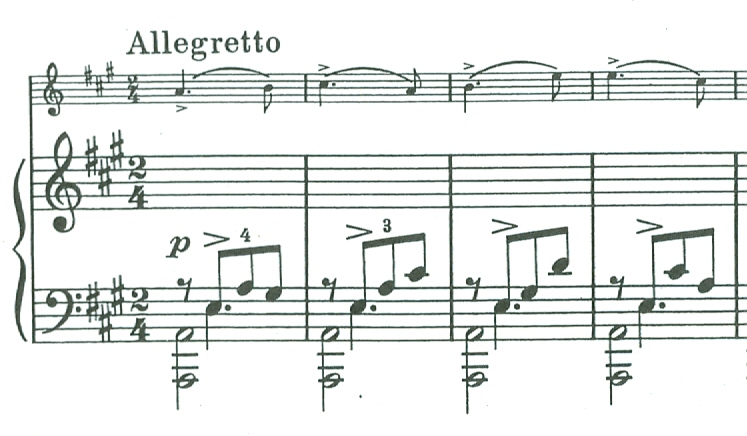 Now, with three observations I will briefly explain why:

(1) Customary way of writing: Whenever he has enough space, Schubert generally writes the accents BELOW and close to the note intended. The accent slants slightly upwards and thus ‘points’ towards the intended note head. This is true of our passage in the solo part. Yet here ‘as an exception’ in the right hand of the piano, he notates the accent ABOVE the note head, because there is indeed much more space here (and if it were underneath, it might collide with the already notated bass note). The accent nonetheless also slants upwards as usual and ‘points’ towards the dotted eighth note, not the half note. We have to pay attention to the Schubert’s way of writing, and not so much to the vertical alignment. If he had really wanted to accentuate the half note he would have put the accent either below it or, for a change, above it and then written the eighth rest over it. And the accent would have slanted more towards the half note. Furthermore, the accent sign is kind of slipping gradually to the right from the first measure to the fourth: even if it can still be read as being with the half note in the first measure (although it is already to the right of this), in the fourth measure it is directly above the ‘1 and’ [dotted eighth note].

In this connection I would like to draw the attention of all blog readers to a great website of the ‘Wienbibliothek’ that showcases an incredible number of original Schubert manuscripts in quality reproduction (but watch out, it’s easy to lose track of time, studying and marvelling there …).

(2) Music: Why would Schubert have put an accent on the bass (half note) when it was already a stressed downbeat, when the syncopation – I mean only a very lightly accentuated syncopation – is musically a much more unusual form of emphasis? (Yes, I know there are passages where Schubert does emphasize what is ‘normal’.) When talking in textual criticism about such debatable passages (although this one is not even in dispute, see above), we say ‘lectio difficilior potior’, meaning that in doubtful cases the more difficult (unusual) reading is the one more likely intended by the composer. The syncopation with its (slight) emphasis is more unusual here, not the emphasis on ‘1’. In my opinion, therefore, Schubert had to write the accent here (at least a few times) to make his intentions clear. What is meant musically is thus not a steadily revolving motion, but – pardon the unscholarly though picturesque word – a slightly ‘wobbling’ motion.

(3) First edition: It was published by Gotthard (Vienna) in 1871(!), more than 40 years after Schubert’s death. The edition is not a source in the true sense (for consultation there are, apart from the autograph, no other primary sources for the ‘Arpeggione’ Sonata). But nevertheless its Viennese engraver also read the accent on the ‘1 and’ [dotted eighth note], which, in keeping with the first point above, says something about his experience with Schubert autographs.

Conclusion: So, I very much support the notation printed in our edition – and incidentally also printed in all other editions of the work – and of course hope that I have also been able to convince you, dear Ms Zimmermann, as well as all the readers of our blog.