At first sight Urtext editions of Satie’s piano music do not seem to pose any great challenge. The primary sources are, as a rule, the first editions corrected by the composer himself, as we can see from the proofs existing for several works. What is more, since many of the autographs have been preserved, they can be consulted in cases of doubt. At any event, the relatively simple structure and the clear layout, especially in the early works, offer hardly any editing problems.  Pianists, just readily as editors, can move along on level, well-constructed paths. But they ought not feel all too secure, for such paths are not always free of stumbling blocks, as we’ll find out in the case of the ‘2ème Gymnopédie’.

Today, the three ‘Gymnopédies’ composed in the spring of 1888 constitute Satie’s best-known works. From their melodic resemblance – rising and falling scale motives on a foundation of static accompanying chords – they can be described as variants of the same basic idea, as if Satie were depicting an imaginary ancient dance from three different perspectives. The consistent course of the three pieces becomes apparent melodically as well as also formally: All three numbers are constructed in two parts, and indeed as A–A’, where the second part is a reprise of the first part with minor variants (through shortening and lengthening sections and re-arranging and altering them harmonically).

When we look at the ‘2ème Gymnopédie’ more closely from this perspective, we notice that the melody’s rise and fall (measures 6/7 as well as 10/11) is replaced in the repeat by two rising motives (measures 41/42 as well as 45/46) – and indeed not only in the first edition, but also in all reprints and new publications right up to most recent times. 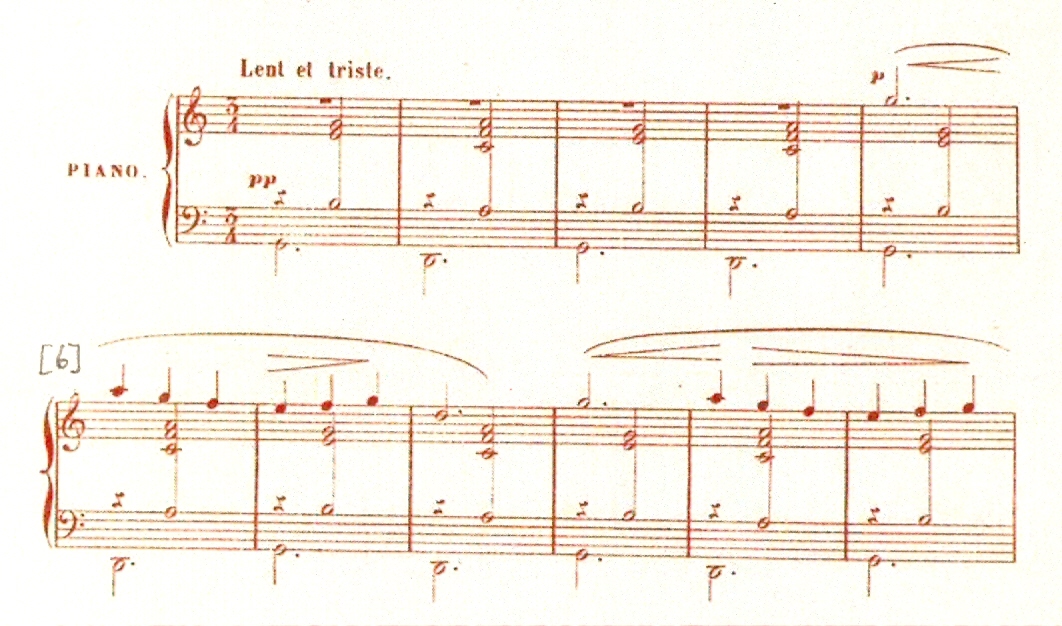 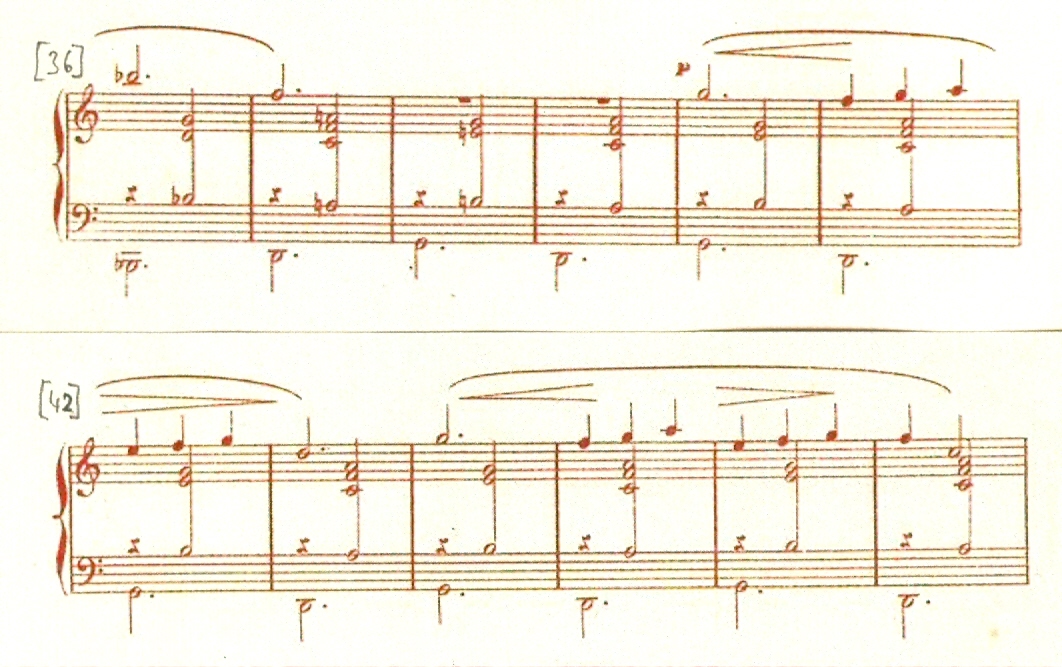 This non-equivalence is all the more noticeable as the falling/rising motion is an essential part of the melody and is not varied at the repeat in either the first or the third of the ‘Gymnopédies’ – why then is it so just in the second? Glancing at the autograph we see that actually Satie originally planned a variant of the basic idea, and in fact in both parts of the piece, so that at the beginning it was to sound exactly the same as in the repeat. He very clearly notated the rising sequence f–g–a in measures 6 and 10 as well as 41 and 45. But then he decided on the change, presumably in order to re-enforce the similarity with the melodies of the other ‘Gymnopédies’, and by doing so, to integrate the piece more closely within the cycle. He alters, though, only measures 6 and 10 to the falling sequence a–g–f (the introductory measures 1–4 are still missing in the autograph):

A corresponding alteration in measures 41 and 45 has been left out – undoubtedly by accident, because the sections of mm. 5–19 and 40–54 are, aside from minor variants of dynamic marking, absolutely identical. Satie apparently avoided correcting the inconsistency even in the engraver’s model and the galley proofs, neither of them still existing. Well, here we are in the first edition at the double rising motive in the reprise f–g–a | e–f–g (instead of a–g–f | e–f–g, as intended according to the correction).

But yet, could it not also be that in this ‘2ème Gymnopédie’, Satie deliberately gave up perfect equivalence entirely? Yes, wouldn’t he have wanted to evade, tongue-in-cheek so to speak, conventional expectations? This cannot be ruled out, but yes, it contradicts the stasis that he has just arrived at in his newly created pseudo-antique style of the ‘Gymnopédies’. Because the change of motive direction in the reprise would indicate a development that, yes, Satie wants to avoid at all costs.

Why then he did not have the passage corrected in later editions? Satie shows an indifference that is also frequently found in other composers.  If indeed they mention errors in letters or correct them in their specimen copies – as for example Satie did for Ogives–, then they do not insist, or at least not single-mindedly, that their publishers remove them.

In any event, players who take up the ‘2ème Gymnopédie’ for the first time will hesitate in measure 41 and ask themselves whether the reversed motive is a mistake or if it is meant to be. Many editions leave it up to them to decide. In the new Henle edition, the editor Ulrich Krämer decided for reasons mentioned to align measures 41/46 with measures 6/10 and in a footnote drew attention to the difference in the sources.

The case shows that ‘Urtext’ implies, on the one hand, knowledge of the sources – without the correction in the autograph we would not have any point of reference for getting rid of the stumbling block.  But on the other hand, ‘Urtext’ must also be open to intentions that go beyond the text handed down in the sources.