A glance at the table of contents in our Urtext edition of Frédéric Chopin’s Waltzes (HN 131, 230, 9131) may already have put a frown on the faces of many Chopin enthusiasts. Such famous pieces as the Waltzes op. posth. 69 & 70, published only after Chopin’s death, are being offered in two versions: first, in a ‘version according to the autograph’, followed by a ‘version according to Fontana’. 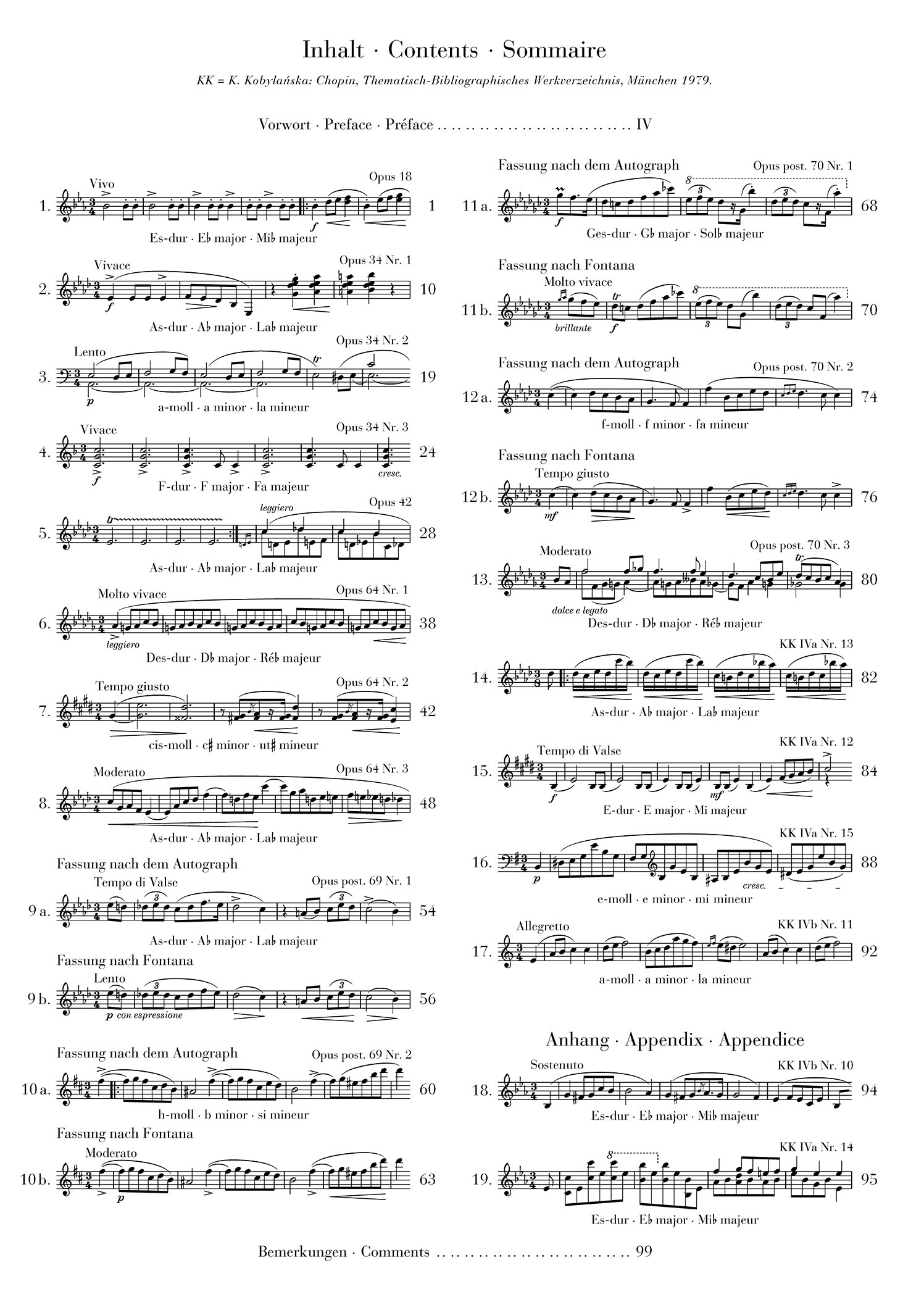 Isn’t the version handed down in autograph good enough? What can be ‘more’ Urtext than a version based on the composer’s manuscript? And who after all is Fontana?

Julian Fontana (1810–1869) was a school friend of Chopin’s from his Warsaw days. The two had gotten acquainted in secondary school, both had composition lessons with Józef Elsner and they kept up their friendship beyond school and studenthood. With Fontana Chopin performed the two-piano version of his C-major Rondo op. posth. 73B in Warsaw in 1828. Fontana, the ardent patriot, took part in the Warsaw November uprising of 1830 and after its suppression had to flee Poland. Then began a real odyssey with stops in Paris, Hamburg, London, Bordeaux, Havana and New York. During his Paris years in 1832/1833 and 1836–1841 it was natural that he should resume contact with Chopin who had also immigrated to Paris, and so their friendship deepened. Fontana advanced to being something of a private secretary to the composer. Chopin entrusted Fontana with numerous autographs for copying; he commissioned him to negotiate with publishers and asked for assistance with mundane matters (even to apartment-hunting). Whether Chopin ever properly paid back his most important copyist, is not known. In any case, he did dedicate both his Polonaises op. 40 to him: dédiées à son ami Jules Fontana.

It may sound cynical, but Fontana’s big moment came only after his friend Chopin had died: He now sent the unpublished Chopin works to press. In close touch with the family of the deceased, he went about this in a thoroughly professional and conscientious manner. Ludwika, Chopin’s sister, drew up for him a list of the unpublished compositions. 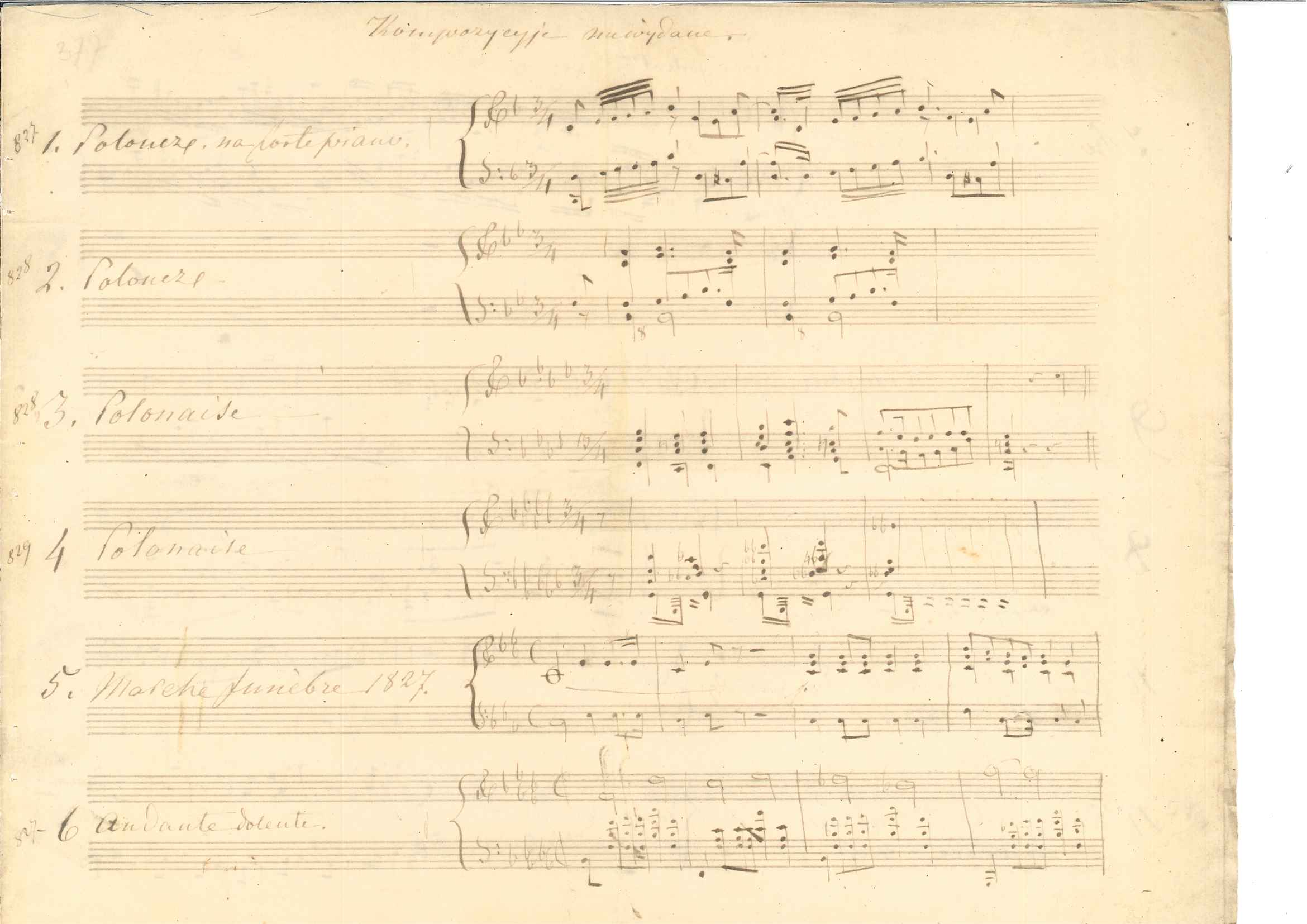 (Ludwika Jedrzejewicz, Kompozycje niewydane – ‘Unpublished Compositions’, an incipit catalogue of Chopin’s thirty-five works, autograph, Warsaw, after June 1854; image courtesy of the Chopin Museum Collection at the Fryderyk Chopin Institute, Warsaw. Owner: The Fryderyk Chopin Society in Warsaw, object number: M/301. Left of each incipit is the title, dated at the far left by Ludwika, as for example 827 for 1827 in the case of the first entry.)

Fontana assigned the opus numbers 66–73 and in 1855 published the Œuvres posthumes pour piano de Frédéric Chopin (the Lieder op. 74 followed in 1859). Vouching unmistakeably for the authenticity of the edition was to be the title page: publiés sur manuscrits originaux avec autorisation de sa famille.

In the preface of this edition appearing simultaneously in Germany (from Schlesinger) and France (from Meissonnier), Fontana explains in detail how its publication came about. Chopin’s family believed that it ‘was fulfilling a sacred duty by having a faithful edition prepared from the composer’s autograph manuscripts […]’. A short biography was to ensue, putting in perspective Fontana’s friendship with Chopin and his part in publishing the many first editions. Fontana continues: ‘His family, knowing of our having been on friendly terms, gave us the noble assignment of compiling the musical treasures he left behind, of choosing from them for publication.’ Fontana once again emphasized that he had made the ‘original manuscripts’ the basis for the edition. Moreover, he had heard Chopin play the works and had even studied them himself under the composer’s guidance. As a result: ‘This last fact was of great help to us when we had to choose between two or three readings, all of them from Chopin’s hand, or had to decipher an often illegible handwriting.’

It is just at this point that the problems we have today with Fontana’s edition begin. It can be assumed that now and then in the music text Fontana deliberately intervened to some extent. So, the dilemma is: Where did Chopin stop and Fontana begin?

Today we know Chopin’s autographs for some of the works. They differ in part, as a matter of fact, considerably from the versions in Fontana’s edition. We may now say they are proof that Fontana misrepresents the autograph-based Urtext.

On the other hand, there is Fontana’s personal testimony, his authorization by the family and the reference to the ‘original manuscripts’. We must therefore at least take into consideration the possibility that Fontana drew on sources that at present are lost. These may possibly have been autographs transmitting the music text in the definitive version. Then the autographs that we know today would be no more than precursors.

So long as we cannot prove the contrary, we are well advised to acknowledge both versions.