You know the Lorelei? You know that from the high cliff at St. Goar she peered into the depths of the Rhine (disastrously for many) … But not for Henle in our edition of the Liederkreis op. 39 (HN 550): following a Schumann text revision in Waldesgespräch, Lorelei’s castle is said to be on a “Fels” [rock] – lost, of course, is the Eichendorff “Stein” [stone] rhyming with “Rhein”, but the conciseness of the expression is enormously enhanced. Whether such deviations from a song text model are permissible, rational or as errors to be corrected where possible in a reliable edition, is a much-discussed question that faces any editor of a lieder edition. 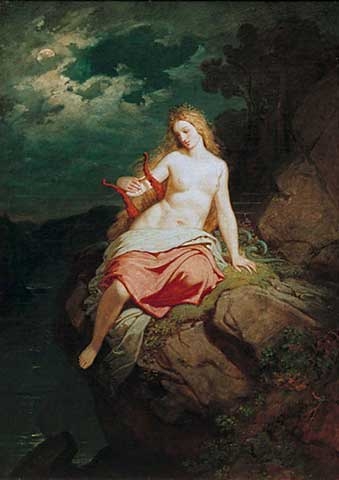 Mind you, with Robert Schumann we can assume that this artist, devoted in equal measure to poetry and music, was totally aware when he penned his lied texts, and that in the poem he might have imagined some potential interventions. This, to be sure, can be proven only when we know of the specific text model used for composition. With opus 39 we are in this happy position: Schumann drew here on a collection of poem copies (Zwickau, Robert-Schumann-Haus) that in 1839 he began jointly with Clara, in which she apparently copied the Eichendorff texts directly from their 1837 first edition Gedichte von Joseph Freiherrn von Eichendorff (Berlin). 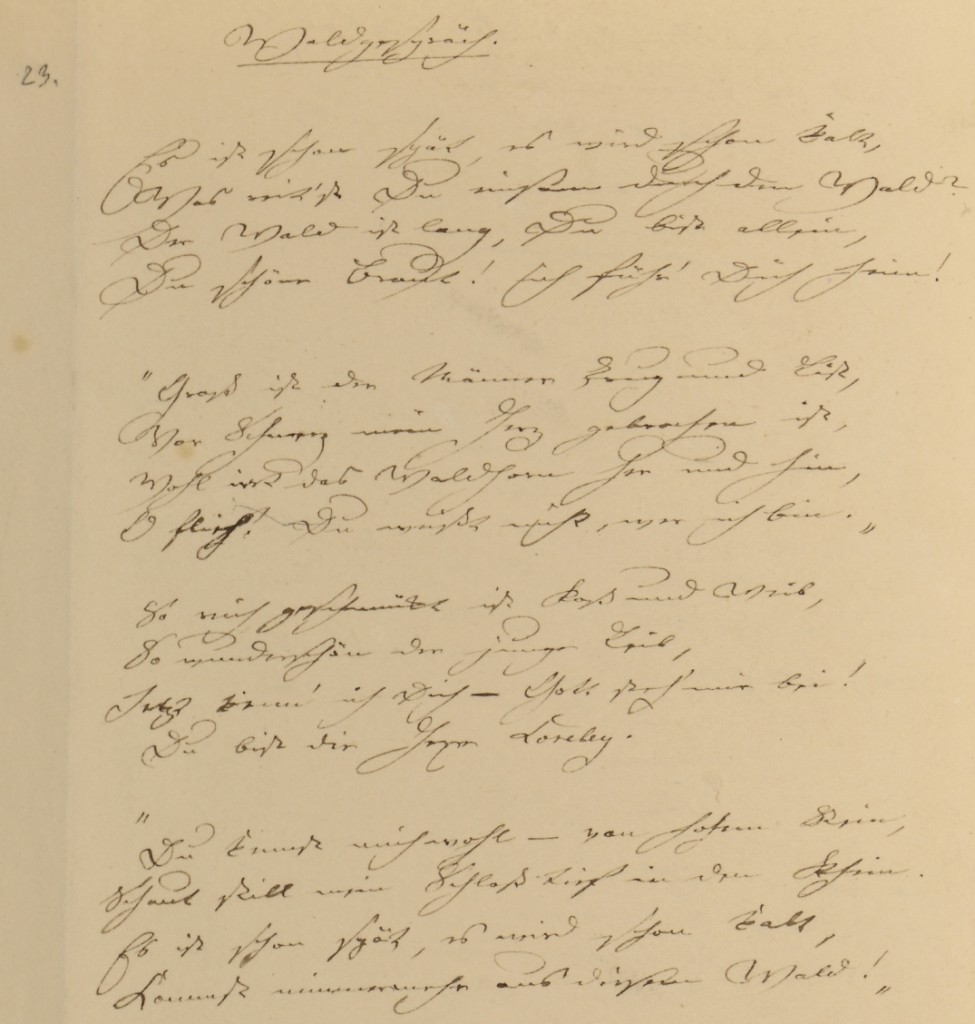 But Robert’s setting, originating in the spring of 1840, differs now from this model in many respects: whether he deleted entire verses (as happened in Die Stille), replaced or reordered words or just changed punctuation. Thus, in Wehmut the nightingale sings “aus ihres Kerkers [instead of: Käfigs] Brust”, and in Zwielicht Schumann made out of Eichendorff’s “Was heut müde gehet unter” the oddly tireder “Was heut gehet müde unter” in order to re-reinforce through the closing phrase’s “Hüte dich, sei [instead of: bleib] wach und munter” not only the urgency of the demand, but at the same time to spare the singer the double consonant “bl”, so difficult to enunciate.

Such interventions motivated by content, metrical-musical or even linguistic considerations in the text models are to be seen in many of Schumann’s lieder, and in the case of opus 39 this poetic licence was even sanctioned by none other than Eichendorff himself. According to Clara, after a concert he commented to the effect that he was “enchanted by Robert’s compositions of his lieder – he thinks that he [Schumann] had brought his [Eichendorff’s] poems to life for the first time”. Whilst it may here be self-evident that as editor one leaves Schumann’s text alone, issues are definitely raised by other variants. Thus, in the Frühlingsnacht the advantage of “Über’n Garten” over “Über’m Garten” remains just as obscure as any possible reason for shifting the weather conditions in Auf einer Burg where Schumann has the rainstorm “drüben [instead of: drüber] gehen”. Many a later editor has conjectured here on Schumann’s part a slip of the pen that just inadvertently got into print, and has summarily restored again the Eichendorff original.

In the case of restoring the “Stein” [stone] found in many editions instead of the Schumann “Fels” [rock] in the Waldesgespräch mentioned at the outset, this must however be somewhat surprising, because any kind of oversight by the composer certainly cannot be supposed here. Rather, Schumann himself crossed-out the “Stein” he originally notated in his composing autograph (Berlin, Staatsbibliothek) in order to change it to “Fels”. 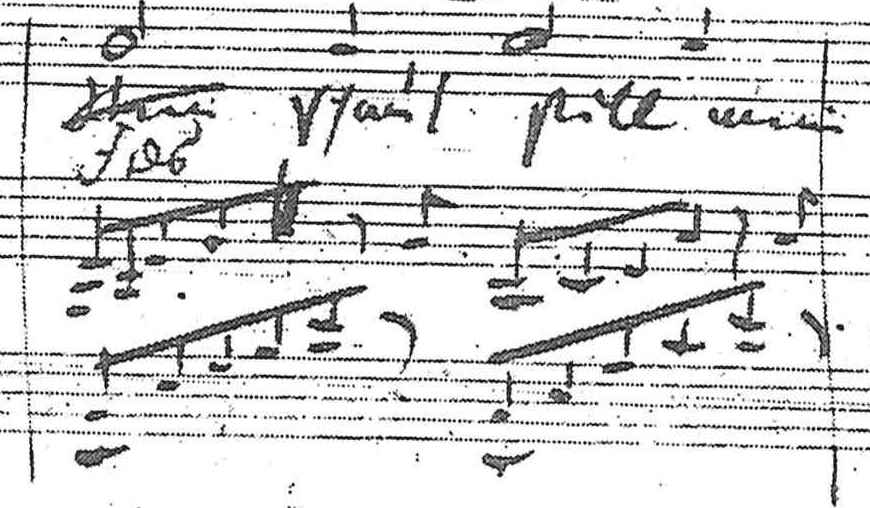 The lied appeared with this text in the first edition of 1842 by Haslinger in Vienna. And even when Schumann revised the Eichendorff cycle in 1849/50 for a new edition by Whistling in Leipzig, where it was just in Waldesgespräch that he made so much change, the “Fels” remained untouched, as we can see from the engraver’s model (Rochester, Sibley Music Library). 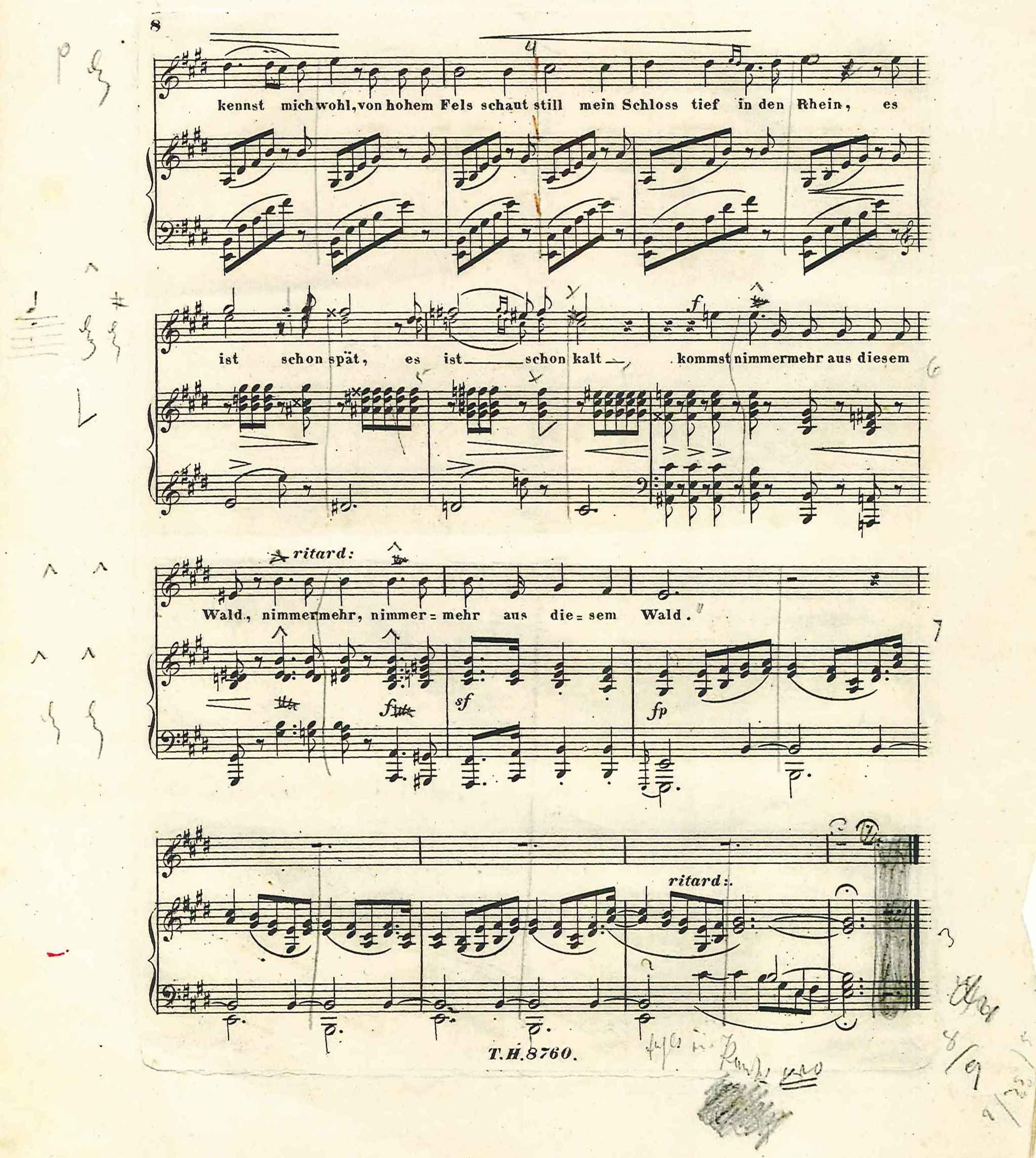 The variant with “Stein” familiar today, first found in the Breitkopf & Härtel Schumann Complete Edition (1879–93) edited by Clara after Robert’s death, traces back to the numerous later editions. Whether this was changed back because of the loss in rhyming or for other reasons can today no longer be clarified. But we cannot assume that it accords with Robert Schumann’s will – which is why our Schumann editor Kazuko Ozawa also gave preference in her edition of the Liederkreis to Robert’s “Fels”. And now we are wondering when we will be hearing on YouTube the first recording of the lied with this text.