Some time ago we received an interesting query from a pianist who had come across something formally odd in Johannes Brahms’ Variationen über ein Thema von Paganini op. 35. As we know, Brahms too was inspired by Nicolò Paganini’s 24 Capricci op. 1 for violin solo, as were already earlier Schumann and Liszt. He composed a cycle of 28 highly virtuosic variations (in 2 volumes of 14 numbers each) on the well-known a-minor theme from Capriccio no. 24 – here in Brahms’ piano version: 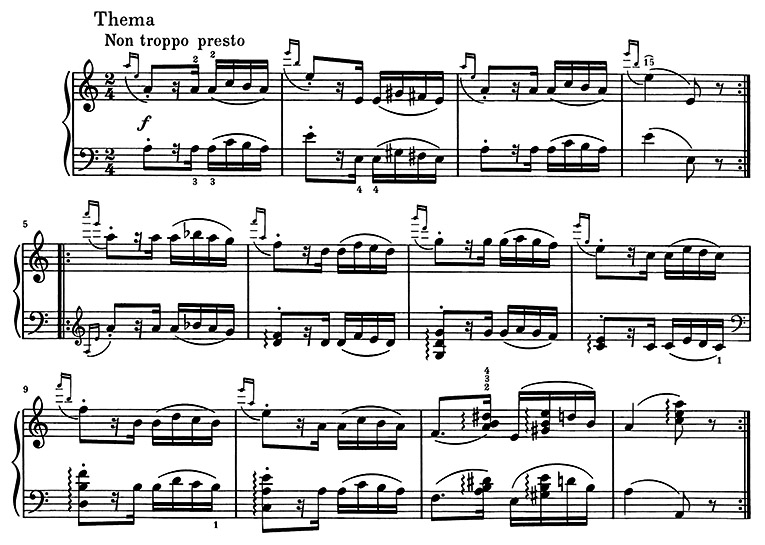 In analyzing the theme formally, we can spot a very clear subdivision into 2×4 + 2×8 measures. Now, in his opus 35 Brahms follows this default almost like a formula and in all variations faithfully maintains the structural model of the theme (often writing out the repeats and applying in the process minor variants, such as using octaves, alternating figuration in right and left hands). Only in each of the last variations functioning as longer codas to volumes 1 and 2 is something of an exception made, though even here the usual ‘8+16’ division is clearly evident.

Yet there is a method to this ‘schematic madness’: within this strictly delineated formal framework Brahms is ever exemplarily dealing with a special challenge to playing technique that lends the variations an etude-like character – not by chance did the original title of the first edition read: ‘Studies for Pianoforte | Variations on a Theme by Paganini’. The editor of our Urtext edition (HN 394), Hans Kann, speaks in his preface of a ‘wide range of pianistic devices, probing all the difficulties of leaps, double chords, polyrhythmic combinations, and many other problems. Each variation concentrates on a particular technical difficulty, approached almost in the manner of a finger exercise.’ Brahms, according to his biographer Max Kalbeck, was even said to have joked about the work: ‘Here are my finger exercises!’

So everything would seem to be clear and in the best of order – but for the 6th variation in volume 2…. Here is the complete music example (the last note is already the upbeat to the 7th variation): 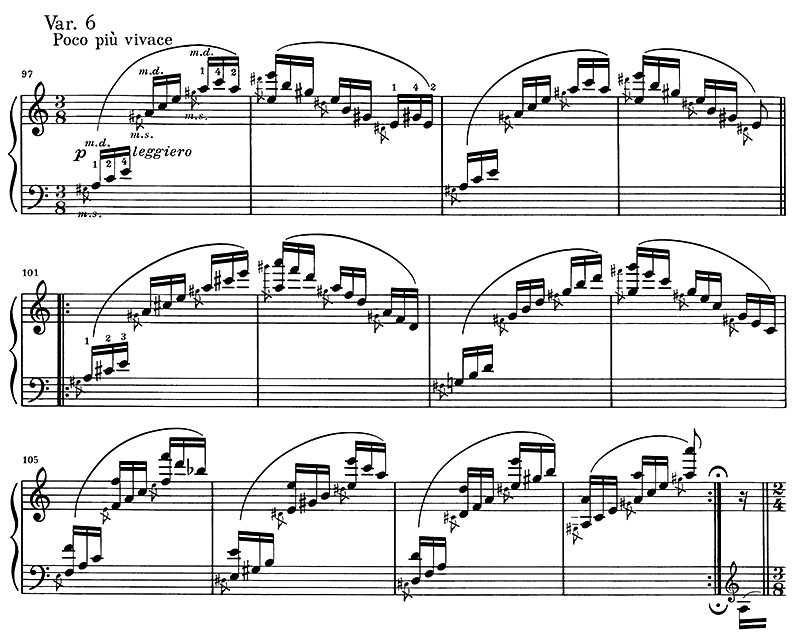 Here we see a marked divergence from the schema described above: for symmetry shouldn’t there be a repeat sign after the first four measures?

This stands to reason; however, the sources are not accommodating in the matter. Serving as the main source of our edition is Brahms’ personal copy of the first edition with autograph corrections and entries. To this is added the engraver’s model he thoroughly revised. Then for some time now, the autograph long regarded as lost can again also be consulted in the National Library of Russia, St. Petersburg. Thus, the source situation is very good and reliable in content, and the findings unanimous: nowhere is there a repeat sign in this variation after the 4th measure. The corresponding page of the first edition can be viewed in the digital archives of the Brahms-Institut Lübeck. The following illustration shows in the autograph the passage where Brahms opens the repeat bracket explicitly only to the right for the 2nd part (the cancelled notes already belong to m. 5; here for lack of space he broke off, to begin again in the next line): 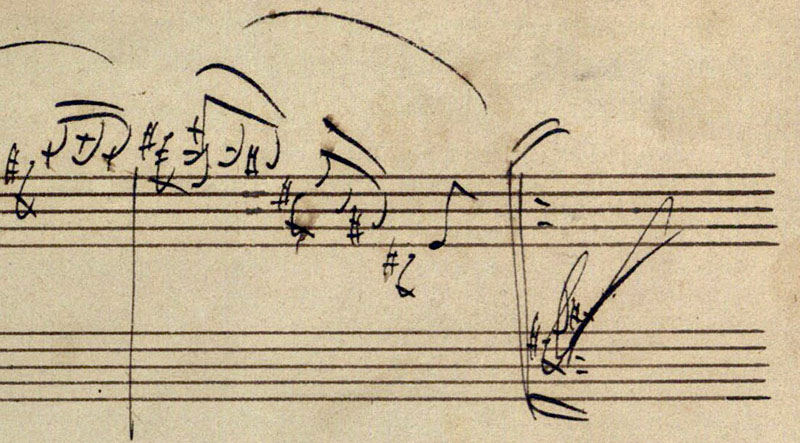 Courtesy of The National Library of Russia, St. Petersburg

So it can only be sheer speculation that this could have been a series of errors. From the autograph we can at least conclude that originally this 6th variation was not even part of the cycle (following on the 5th variation was the present 7th variation) and was notated only later (with a different pen in different ink) on the last page of the music book. Could it have been a spontaneous afterthought where Brahms already forgot his original formal structure…? Improbable, if we consider how frequently he played – even publicly – his own work. Furthermore, he is known as a careful proofreader, and he had only just added a comment on the correct direction of stemming (‘Stem the appoggiaturas consistently downwards, the large notes upwards.’) in the 6th variation of the engraver’s model. While doing this wouldn’t he finally have also noticed the repeat ‘lapse’? Even Eusebius Mandyczewski, Brahms’ close friend and editor of the first Brahms Complete Edition who consulted these sources in 1927 for volume 13 of the edition, did not see any reason to question the original notation or at the very least to comment in the editorial report:

How should this then be resolved? On this question music practice seems to agree that those 4 measures are to be repeated. The pianist and Brahms scholar Detlef Kraus commented on this passage: ‘For reasons of formal balance I repeat the 1st half of the 6th variation. Otherwise it would only be altogether too brief.’ (Johannes Brahms als Klavierkomponist, Wilhelmshaven, 1986, p. 67). Also, in the following selection of recorded examples all the pianists repeat the first 4 measures (all examples start directly with variation 6).

Definitely, though, there are music scholars who read this singular passage as Brahms’ deliberate break with symmetry (see the publication, Julian Littlewood, The Variations of Johannes Brahms, London, 2004, p. 103; here the excerpt from GoogleBooks). Personally, I consider the question in any case too equivocal for us to ‘conform tacitly’, as nicely expressed so often. Each musician should decide on his or her own, bearing in mind the facts mentioned above. But here’s good news: if you are able to play those devilishly tricky variations so as to be confronted with that decision in the first place, you have already mastered the hardest part…