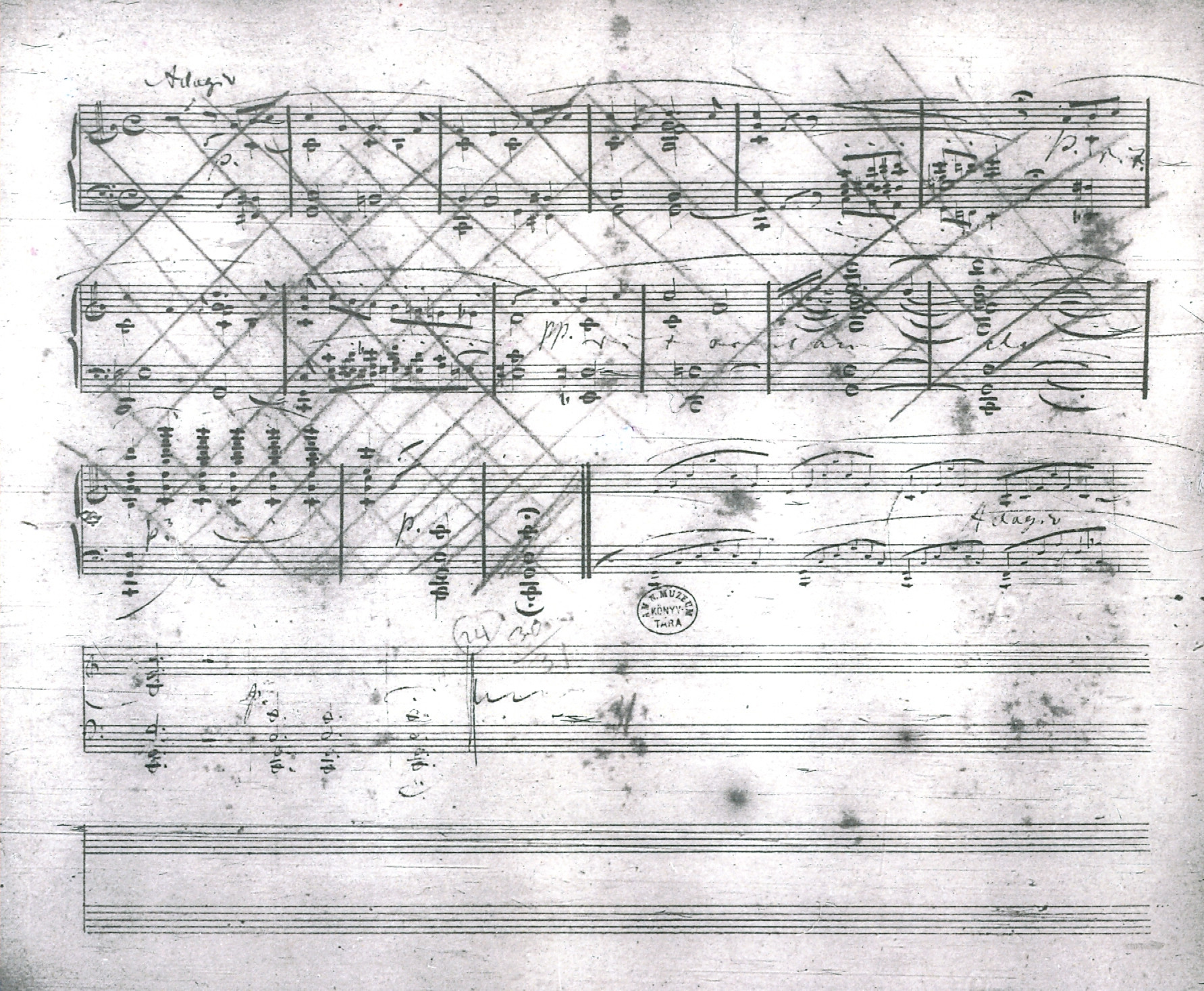 What you can see here is the last page of Robert Schumann’s C-major Fantasy op. 17 is in the handwriting of the copyist Carl Brückner of Leipzig. The source is located in the Széchényi Library in Budapest. The originally notated measures (beginning with ‘Adagio’ at the top left) that the copyist had written from the (lost) autograph, Schumann himself crossed out while revising and preparing the work for publication. After the passage he then wrote the definitive [endgültig] closing measures that we can only barely identify here. ‘Settling the matter conclusively’ [end-gültig] – for this is also the way it appears in the printed edition that we know Schumann proofread.

Being a standard situation for anyone who deals with composers’ manuscripts and compositional history none of this would be worth further mention. But in this case we are looking at a highly interesting revision. For Schumann had originally drawn on the closing of the first movement of the Fantasy where he cites the Beethoven’s wonderful melody that accompanies the lines from the song cycle “An die ferne Geliebte” op. 98: “Nimm sie hin denn diese Lieder, die ich dir, Geliebte [Clara], sang” (So take them, these songs, that I wrote for you, loved one). We do not know why Schumann crossed out this reminiscence and replaced them with a normal closing. Perhaps he felt that the message of the Beethoven citation wore itself out and was damaged by being repeated, or he thought that the tow-effect of the grand apotheosis of the preceding measures would be weakened by a new, and especially so distinctive musical idea. One could also argue the opposite, namely that he later regarded his – more ingenious – first idea as too risqué, and consequently replaced it – with something more commonplace. Whatever the case may be, philologists must not discuss issues of taste; Schumann crossed out these measures and replaced them. And the question that arises is how we are to deal with such a phenomenon in our editions. For, ever since this autograph surfaced, the closing of the C-major Fantasy op. 17 is being discussed amongst musicians and already there are some recordings and concerts with the “original” closing measures.

Since 1987 G. Henle publishers have actually published exactly this original closing, following the Budapest copy. All issues between 1987 and 2003 additionally included it in small print as a footnote. Since, however, we brought out the re-examined, critically revised edition in 2003, we have again dispensed with this addition; it occurs only in a reference in the editorial notes. Why is that?

In my view, the decision of that time was a mistake. Because of the worldwide circulation and use of our editions, we as editors and publishers have a much higher responsibility in dealing with music texts than do performing musicians. Schumann’s will here is unambiguous. He did not want played the measures superseded in his view. He clearly cancelled them and notated what he wanted. He conscientiously proofread the first edition. This alone is Schumann’s last word. This we must respect. Our idea of a “work” would crumble to dust in the end were we to decide arbitrarily and from case to case at our own discretion what is “better” or “worse”. The floodgates would be open to capriciousness. As much as it is highly interesting for the scholar and interpreter to see how the C-major Fantasy came to be what it is today, an Urtext edition has little to do with the workshop. At most in special cases we can portray in more detail revision stages in the editorial apparatus or in an appendix. But suchlike actually belongs in the apparatus of a complete edition. We do not want to present our customers with preliminary stages, but with the correct text as legitimated by the composer.

Do you have a different opinion? Write us about it!

Regarding Schubert as well similar heatedly discussed phenomena exist; Schubert will be the topic of my next blog.

PS: This is an excerpt from a much more extensive text taken from the ‘Schumann Forum 2010’.

6 Responses to »Will versus Caprice. On the the closing measures of Robert Schumann’s C-major Fantasy op. 17«