Our editorial department is always receiving queries from users requesting information on certain passages in the sources: ‘Is it really that way in the autograph?’ or: ‘Is it actually the same in the first edition?’ Sometimes the background to the question is the assumption that ‘Urtext’ means a (more or less) literal reproduction of the model determined as the main source. Of course, this isn’t the case, for urtext editions, entirely apart from correcting errors, must also as a matter of course adapt personal or prevailing style conventions in the sources to today’s musico-graphic norms.

One of these elements has to do with the matter of cautionary accidentals. The use of unavoidable accidentals in music with bar lines is relatively clearly regulated: Accidentals are valid for a single pitch over the duration of a measure, and in the case of ties, go beyond the measure to the final tied tone. Adding extra accidentals – cautionary accidentals – is on the other hand in principle completely optional. Raising or lowering single tones usually calls for again rescinding the accidental to be on the safe side in the subsequent measure (at least); the same is also true in the same measure when the previously raised or lowered tone appears in another octave register. But there is no hard and fast rule; even in complete editions the phenomenon is treated very diversely.

How do we as editors deal with cautionary accidentals in the sources? If we leave those that by today’s usage are practically-speaking superfluous, do we in fact gain by reproducing the composer’s harmonic thinking, while running the danger of annoying musicians by overdoing it (think, for instance, of Max Reger). But, conversely, what if in the process we bring about just such confusion as with an added accidental accentuates in turn the obvious.

In the following I have compiled some instances from recently published editions (the accidentals in question are marked in red).

1) Let’s start with a ‘classic’ case: the altered tone f♯¹ returning in another part (here even played by another hand), taken from the new edition: Gabriel Fauré, Violin Sonata No. 1 in A-Major Op.13, movement II, measure 4 (HN 980). 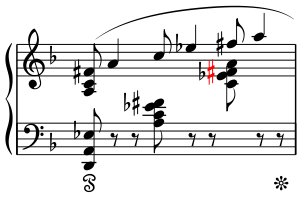 The accidental is not necessary, yet useful still – or?

2) Similarly, but in the opposite direction is the next example: Emmanuel Chabrier, Bourrée fantasque, measure 166 (HN 1162): here the same tone is raised (a♯, upper stave), subsequently notated in another octave register in a form not raised (a, lower stave). For Chabrier playing a¹ in the left hand was obvious (see the preceding measure), so he did not put a cautionary accidental. Is then the ♮ superfluous or does it nevertheless clear up any possible doubt? 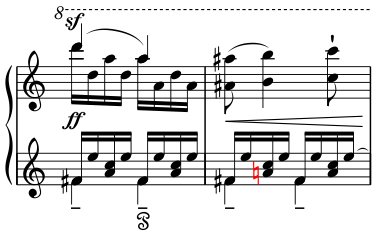 3) Apropos doubt: Fauré is one of those composers who do not always put accidentals in consistently, but quite inattentively forget. As a rule it is clear what is intended, and in printing the engraver has often added what was necessary. In the next passage (again, from HN 980, here movement III, measure 184 f.) some doubt remains. In the sources there is no natural sign before e¹, but adding it might still be reasonable, because e♯¹ again as a passing note to f♯¹ in the next measure 185, as it was an octave lower at the start of m. 184, would be melodically not totally out of the question .…

4) A similar example is found in Mozart’s Piano Concerto KV 503, movement I, measure 364 (HN 825). Mozart raised f¹ to f♯¹ as a melodic changing note, but unfortunately did not put an explanatory accidental (♮ or again ♯) an octave higher. So f² must be played according to the rule. But since in the posthumous first edition f² was raised to f♯², probably in view of the next goal tone g², a footnote is given here in our edition conspicuously referring to this discrepant reading. That is, we cannot rule out the possibility that the first edition is based on a now lost copy still revised by Mozart himself.

5) With the increasing dissolution of the major-minor tonal system at the end of the 19th century, the number of accidentals also grew and cautionary accidentals likewise. With tones and sounds unprecedented harmonically, composers understandably saw the necessity of avoiding misunderstandings by notating additional accidentals. A passage from Maurice Ravel’s Sonatine (movement III, measure 140, HN 1018) will demonstrate this. 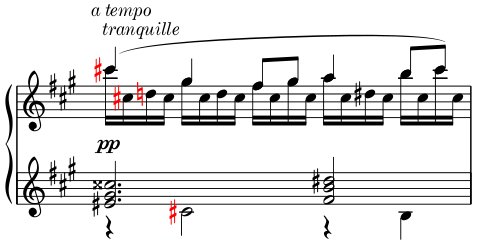 According to the usual rules, in the upper stave the ♯ only has to come before the 2nd note (c♯²) owing to the cx² in the left hand, but it seems logical to give the octave-transposed notes c♯³ and c♯¹ also a cautionary accidental. But why the ♮ before d², before a note that was previously neither raised nor lowered? This goes back to Ravel himself who obviously wanted to forestall here a possible anticipation of d♯² (not coming until beat 4) precipitated by cx². In our new edition we are following this, the composer’s warning – with justification?

6) Another example, in conclusion, of the problems in music not divided into measures, is exemplified by the beginning of Erik Satie’s 1ère Gnossienne (HN 1073).

When the organization by measure-unit ceases to apply, is this then to be replaced by the line itself as a new entity? Then, all accidentals marked red would have to be eliminated. Or do now all accidentals in each motivic entity – as corresponding here to the original – still consistently have to be repeated?

What do you think about putting in accidentals? It would be great if you would give us your opinion of one example or the other.

5 Responses to »The crux of sharp or flat: Just enough cautionary accidentals? or are extras o.k., too?«