Posted on September 17, 2012 by Norbert Müllemann

Alexander Scriabin (1872–1915) was not only one of the outstanding composers in Russia around 1900. Time and again he also appeared publicly as pianist – especially as interpreter of his own works. His compositions are at present among the standard items in the concert repertoire, but today we can also still get an idea of his piano playing. Twice, in 1908 and 1910, Scriabin had recordings of his playing made on the player piano (pianola). In 1908 a recording session took place at the Hupfeld firm in Leipzig, in 1910 Scriabin was captured on piano rolls by Welte-Mignon in Moscow (we recommend this link to the Pianola Institute to anyone wanting to grasp in more detail the various recording techniques and firms). Scriabin was obviously taken with the results. In a Hupfeld sales brochure there is a composer testimonial quoting a comment by Scriabin: 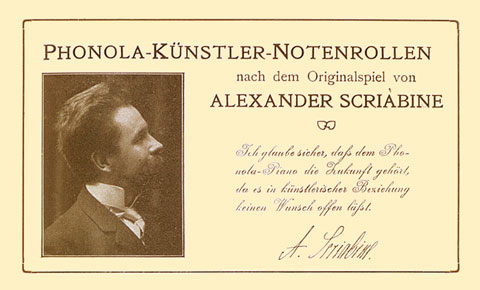 ‘I firmly believe that the Phonola-Piano has a great future, especially since in artistic respects it leaves nothing to be desired.’

Thus, originating besides many shorter works (etudes, preludes, mazurkas, poems) 1908 is a recording of his interpretation of the 2nd and 3rd piano sonatas (ex.: movements 3 & 4).

Modern Scriabin research has rediscovered this recording and analyzed it thoroughly scientifically. Also more recent edition projects no longer disregard the piano rolls. When it comes to examining sources for a work, also included besides manuscripts and prints are as a matter of course sound sources (when available), thus recordings by the composer in person. The most recent edition of the 3rd piano sonata published in the Henle publishing house takes the Hupfeld recording of 1908 into consideration. Our editor Valentina Rubcova has carefully evaluated this sound source with the aid of a transcription (ed. Pawel Lobanow, Moscow: Musyka 2010) and kept pondering in the process whether its differences from the other sources – the main source is the authorized first edition – have repercussions on editing the music text. Why? Because Scriabin plays something other than is specified in the first edition.

Many of the differences are minor and presumably arose in the heat of performance. Thus sometimes ‘lacking’ are full-voiced chords, or vice versa, Scriabin adds extra notes. But two passages, at least, deserve special mention. In the 1st movement the composer skips measures 116–119, hence cutting the work by 4 measures. Is this intentional or inadvertent? Given that mm. 117–119 rather literally repeat what was already stated in mm. 113–115, does that then however make them expendable? The recording seems to suggest so.

Almost more interesting still is the recording of the final movement. Essentially the composer inaudibly intervenes in the left hand’s accompaniment figure. Amongst pianists the rolling broken chords are dreaded and in reality hazardous at the prescribed tempo. Scriabin changes them a bit: in some figures he substitutes note repetition for changing tones – with this trick the passage is actually easier to play (in the example below the version of the first edition is in the lower stave, in the upper stave, what Scriabin plays):

The  ‘simplified version’ is not only documented on the Hupfeld rolls – Scriabin’s contemporary Nikolay Zhilyayev reports in the introduction to his edition of the 3rd sonata published in 1924 that Scriabin played those easier figures. An autograph source even exists that transmits the easier note repetitions. A sketch leaf (see below for the transcription of the sketch) shows that Scriabin originally conceived the figures around those note repetitions:

So what now do we conclude from this? Is the finale too difficult – where apparently not even the composer himself can play it in the published form? Should then the music text in the edition be altered accordingly?

Well, hardly. As important as the sound source may be as a document (and the further we go into the music of the 20th century, the more often will we be dealing with it, cf., for instance, the Preface and Comments in the edition of the preludes by Gershwin HN 858, they do not have the same status as manuscript or printed sources. As snapshots they are not intended to transmit the final form of the work. Sound sources offer extra information above and beyond the ‘paper sources’; they can also expose engraving errors in a printed edition. But there is no doubt that Scriabin intended the authorized first edition to transmit and disseminate his work. It is from this that the third sonata is to be studied, including the ‘repeat measures’ in the 1st movement and the surging virtuosic chord figures in the finale.

Here I would especially like to refer to the book by Anatole Leikin: The Performing Style of Alexander Scriabin, Farnham: Ashgate, 2011. Beyond this blog’s posing of the problem is found there a discussion as to how far piano rolls as sources are reliable at all. Not all parameters of the playing could be reproduced in a suitable form; moreover, after recording the rolls were reworked by technicians in order to correct playing mistakes. Whether piano rolls really do authentically capture any performance – this question can probably not be answered conclusively.

7 Responses to »Scriabin plays Scriabin – Is the finale of the 3rd piano sonata too difficult?«