Posted on October 1, 2012 by Norbert Gertsch

Editors of sheet music are not alone in suffering from the problem of bringing a project to an end at some point – composers, too, were and are regularly confronted with it. Felix Mendelssohn-Bartholdy, for instance, is notorious for having still continued composing in the galley proofs of the engraving plates during publication of his works. And then there was Franz Liszt who rewrote and republished his works sometimes decades after their first appearance. Isaac Albéniz, in his opus summum, the Iberia cycle, presents a case where a process of revision initiated from the outside could indeed not be concluded, for the composer passed away – with disconcerting consequences for the “Urtext” question.

Let’s first list the Iberia sources relevant to an Urtext edition:
(a) The autograph manuscripts of 1905–1908, notated extremely carefully as fair copies. Here is a short excerpt from the Almería autograph: 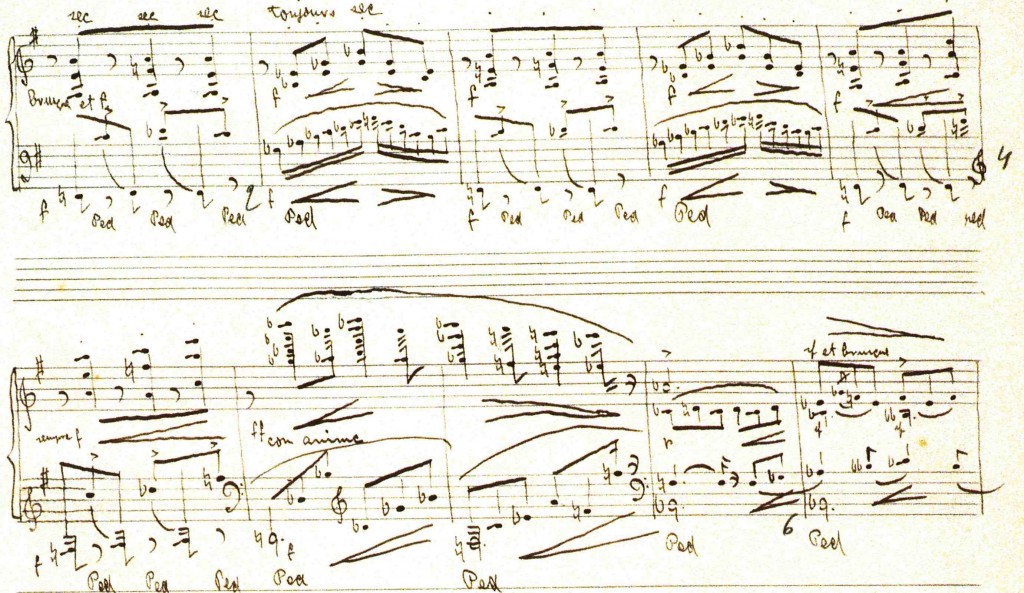 (b) The cycle’s first edition of 1906–1908 from the Paris publishing house Edition mutuelle. This publishing venture, associated with the famous Schola Cantorum, operated according to a completely different business model from that of ordinary publishers. In the spirit of mutual support a group of composers was delegated to make the works of other composers known through publication and performance. The composer retained in the process full usage rights to his work and had free access to the engraving plates. The income was split amongst publisher, composer and a financing ‘pot’ for other projects.
(c) The Spanish reprint of the first edition from the Madrid publishing house Unión Musical Española. This reprint can have appeared only after 1914, the founding year of the publishing house (even more likely, only after 1918, see below). Hence, appearing after Albéniz’s death, it is an edition whose source value is at the very least debatable.

When I was approached some years ago by a South African pianist, João dos Santos, concerning whether G. Henle publishers wouldn’t like to bring out an Urtext edition of Iberia, I was at the same time also promptly ‘warned’ by him that the Spanish reprint would be completely unusable, since it was lacking in essentials and was just bristling with mistakes. If we wanted to publish an Urtext edition, we would have to base it on the meticulous Paris print and check this for errors against the autograph manuscripts.
What at first puzzled me, though, was the fact that the Spanish reprint obviously used most of the engraving plates of the Paris first edition that came to Spain in 1918 by way of Albéniz’s estate. How to explain that an unusable reprint could come from a meticulous first edition? Here, only a line-by-line comparison of the two editions could help further. In the course of this it quickly became clear that between first edition and reprint the music text on the engraving plates had to some extent been seriously altered and corrected. In the main this has to do with two phenomena:

(a) The music text very heavily marked by Albéniz was systematically thinned out. I am including the autograph here because it shows that this process was already happening between autograph and first edition and then between first edition and reprint. The excerpt stemming from El Polo:

Example from the autograph of El Polo

Example from the Paris First Edition of El Polo

Example from the Spanish reprint of El Polo

(b) At particularly difficult passages the Spanish reprint often alters the distribution of the notes between the two hands:

Example from the Paris First Edition of El Puerto

Example from the Spanish reprint of El Puerto

Is it likely that these changes were made by an ambitious publishing-house editor in Spain? Or are there not perhaps after all signs that Albéniz himself, who after the appearance of the first edition also had the plates in his possession, ordered these changes?

Here are my arguments that Albéniz authorized the alterations in the Spanish reprint:
(a) The changes in the music text on the engraving plates are done with the same engraving tools used in the original engraving of the Paris edition. This strongly suggests that the changes occurred in Paris where Albéniz lived during the last years of his life. Who else in Paris would have made the changes and for what reason?
(b) The systematic thinning out of the music text was very clearly in keeping with Albéniz’s wishes. There is ‘evidence’ of this in the sources. Found in his hand in the Rondeña autograph are numerous cancellations along these lines: 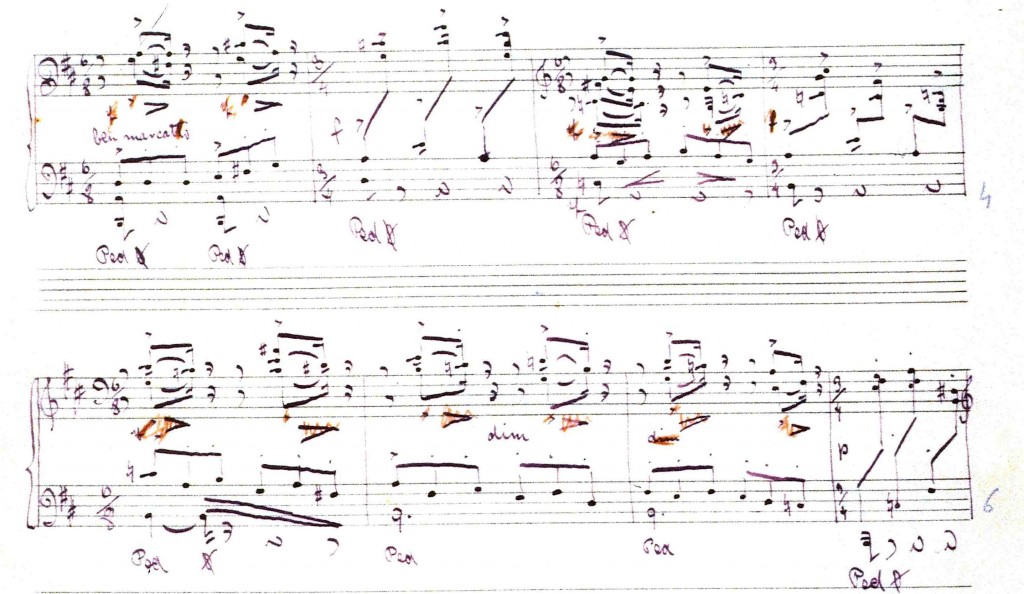 Example from the autograph of Rondeña

(c) Albéniz himself already wanted to redistribute the notes for improved playability. Here too there is a document for us to consult: galley proofs for the first edition of the 3rd volume of Iberia; here, an excerpt from Lavapies: 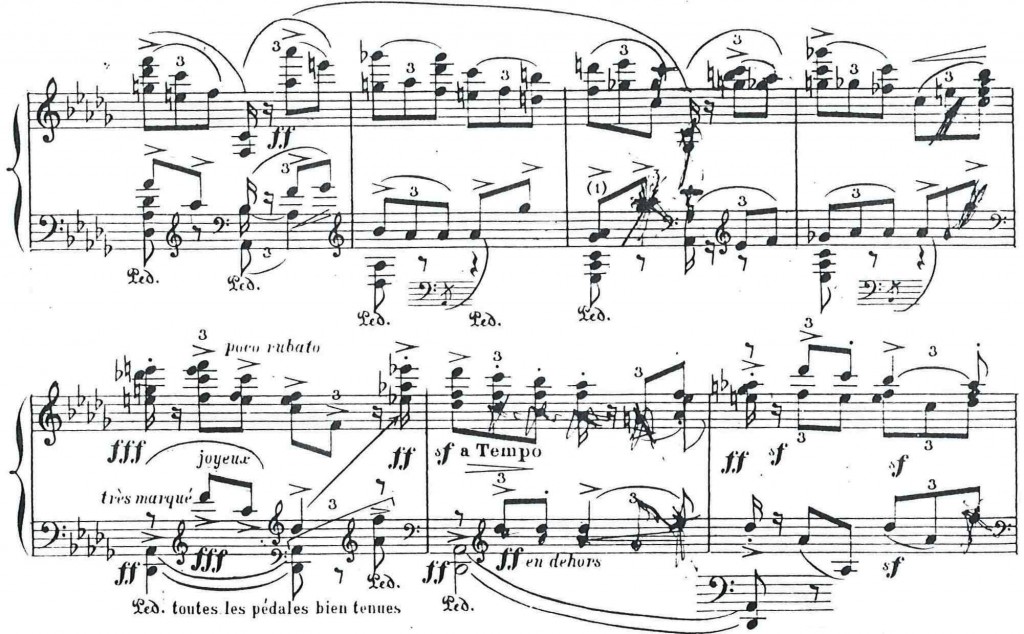 Example from the galley proofs of the First Edition of Lavapies

All this made me convinced that at some point after publication of the first edition Albéniz continued correcting and altering the engraving plates. The plates brought to Spain contained a music text that presumably in all deviations goes back to the composer himself and was therefore fully authorized. The motivation to make these changes stems most likely from the pianists of the first public performances, who certainly had to do battle with the highly complex music text. We also have an indication of this in the autographs: In Rondeña Albéniz altered three measures, which were difficult to read, with the suggestion to engrave this passage ‘with the revision by Mademoiselle Selva’. Blanche Selva was the interpreter in the French première.

I am positive, furthermore, that Albéniz was no longer able to finish this revision process because the above-mentioned cancellations in the autograph of Rondeña were not carried out in the engraving plates.

Please don’t get me wrong. As a consequence of my analysis I am indeed making the Spanish reprint (which incidentally is to date still being sold – though with ‘lost’ footnotes) the main source of my edition. Nevertheless, it would be disastrous to trust it as faultless. Rather – and here João dos Santos is right – it bristles with errors that could only be rectified in direct comparison with the autograph. With this flood of signs, who is surprised at that! You can judge the results of my efforts in the three volumes so far published (HN 647, 648, 649). There I also go into detail about many other open questions and readings. And anyone who would really like to have a reproduction of Albéniz’s autographs will be delighted with the facsimile edition of Iberia published by Schott Music.

Have you found mistakes in the Iberia Urtext editions? Please let us know. If you find any mistake not yet known to us, we’ll treat you to an Urtext edition of your choice from our catalogue.

3 Responses to »Too much access! – Isaac Albéniz revises his Iberia cycle«