You know George Gershwin’s Piano Concerto and the famous place just before closing, where a percussion instrument introduces the climax of the piece with a loud ‘bang’? You don’t? Then, as an introduction here comes first of all an excerpt from the film ‘An American in Paris’ of 1951, in which Oscar Levant – unmistakably amusing, by the way, in the person of conductor, pianist and percussionist – gives the passage his best.

The printed score, authoritative up until now, reads: 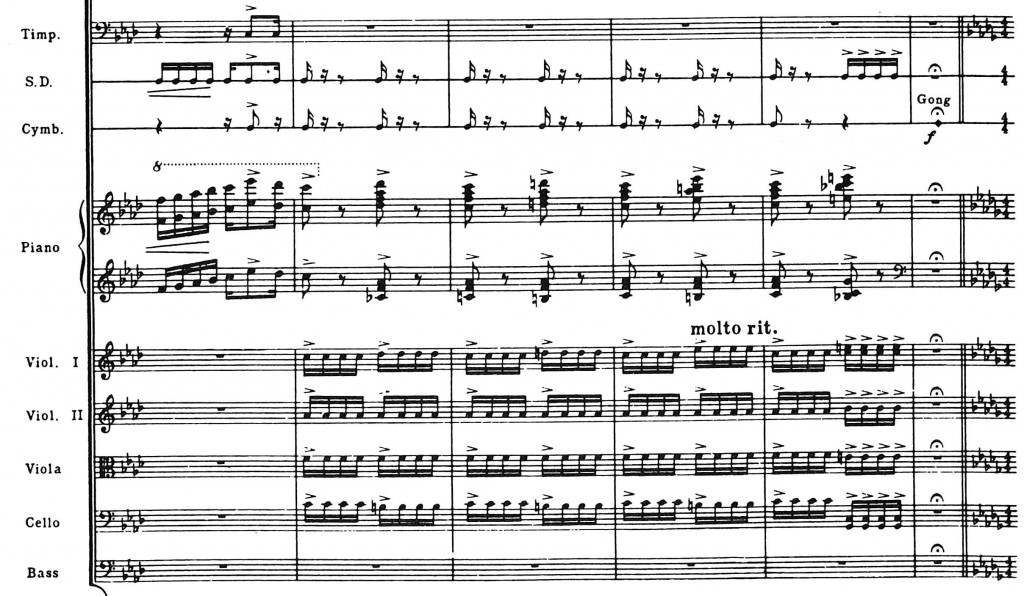 In the piano reduction available today, we find, though:

And which instrument do we see in the film? Wasn’t it an instrument that we know in German as the ‘tamtam’?

For Urtext editors, alarm bells are ringing. What now did Gershwin really envisage for this passage? And are these then even different instruments in the cases mentioned?

Let’s see first what definitions we find as we glance at a page of Die Musik in Geschichte und Gegenwart [‘Music in Past and Present’] – our standard encyclopedia?

Gong: An ancient Asian idiophone, hence sounding by resonating. The metal disc, set to vibrating with a soft mallet, is hung vertically in a frame by a string from two perforations at the edge. As understood today, a gong has a definite pitch, and so what is to be played is notated on a normal, five-line music staff. The gong sounds like this.

Tamtam: Likewise, an ancient Asian idiophone, hung and played like a gong. Mind you, the tamtam has an indefinite pitch, so is not notated on a five-line music staff, but on only one line. The tamtam sounds like this.

Unfortunately, both gong and tamtam are frequently referred to together as ‘gong’ in the English-speaking world at Gershwin’s time, and even today the terms are often used synonymously, although the instruments sound clearly different.

Cymbal Crash: The English directions for striking together a pair of cymbals (also ‘cymbal clash’). The cymbal, likewise a metal idiophone, is pierced in the centre where it does not vibrate at all or only barely so. A pair of cymbals is held through straps. A clash sounds like this.

So, if we now go searching for Gershwin’s intent in the music sources of the ‘Concerto in F’, we have to begin chronologically with the so-called sketch score. This is an autograph short score in which Gershwin notated the solo piano and wrote down the orchestral accompaniment on from one to three other music lines (in a form already approaching the piano reduction). Gershwin could certainly very well have also played directly at the piano from this, the actual ‘composing manuscript’ of the work. In the passage of the ‘sketch score’ that interests us here, he merely notated a general sign for a percussion instrument.

In somewhat modified form Gershwin also took this nonspecific sign over into the autograph orchestral score. It is found in an unusual place, just on top of the double bar line before the ensuing grandioso section, furnished with a fermata and at the height of the cymbals notation. The orchestral score was used in performances and clearly reflects conductors’ confusion. Directions were added in various hands: ‘Tam-tam’ by the conductor of the première, Walter Damrosch; ‘Cymbals’ in an unidentified hand; ‘Gong’, in pencil, likewise in an unknown hand, and subsequently erased.

Regrettably, since his score was published posthumously in 1942, Gershwin himself did not supervise its publication. The publishing-house editor and editor of the score, Frank Campbell-Watson, opted, as we know, for the ‘gong’ (and to it added also a whole measure). Whether he actually meant the tamtam, as Walter Damrosch suggested, we can only conjecture.

We find, on the other hand, in only one source an assigned instrument, ‘Cymb. crash’, authorized by Gershwin in the piano reduction, appearing in 1927 still during the composer’s lifetime. This direction conforms in position to the sign in the cymbal staff in the autograph score described above. (Gershwin’s involvement in the publication of the piano score is beyond question, because extant are galley proofs and impressions with corrections in his hand.)

So, the Urtext perspective presses for a decision contrary to the performance tradition: According to the extant authorised sources it is not a tamtam, but a cymbal crash.

And yet, doubts arise about excluding the special status of the autograph score and the performance aspects in the deliberations. In matters of orchestration the manuscript score turns out to be a ‘work in progress’. Over the years Gershwin experimented with it at numerous passages, adding instruments, doubling others, crossing-out entire groups, etc. From the many pencilled entries in his hand we can only surmise that with new performances of the work other orchestrations were also heard. Added to this are the entries by Walter Damrosch, who, not only at the première, but also after Gershwin’s death, repeatedly conducted the work from this score. His entry ‘Tam-tam’ at said passage can have been coordinated with Gershwin even though in the piano score of 1927 there is still a cymbal crash. For the two known recordings of the concerto with Oscar Levant originating before the publication of the orchestral material in 1942, the autograph score was used (and the parts material copied from it). The tamtam can be heard in both. This perhaps also led Frank Campbell-Watson to incorporate it into the printed score. I would follow his decision.

One Response to »Gong, tamtam or cymbal crash? – Gershwin’s ‘Concerto in F’ as work in progress«