Posted on January 7, 2013 by Annette Oppermann

A serious scholarly book publication can be recognized by the footnotes – and in a way this also applies to musical Urtext editions, because here too it is imperative to base the printed music text on appropriate evidence. Where and how this is done depends though on many parameters – amongst other things, on the question of how much verbal text the music or the practicing musician will put up with.

On that point, we must realise first of all that the idea of the Urtext edition did in fact originate at the end of the 19th century to counter the then widespread editions with commentary where explanations in and around the music text proliferated to such an extent that sometimes there was more text than music on a page of score – as Hans von Bülow’s edition of Beethoven’s Sonatas for Cotta: 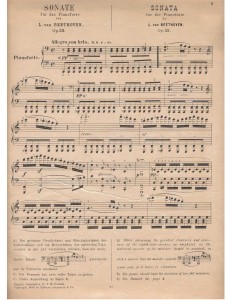 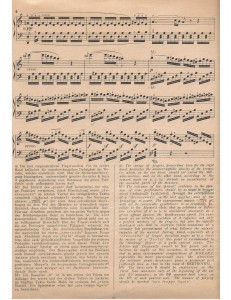 The series Urtext classischer Musikwerke (Urtext of Classical Music Works) initiated in 1895 by the Royal Academy of Arts in Berlin turned against such verbal overloading of music; our modern Urtext editions go back to this impetus. 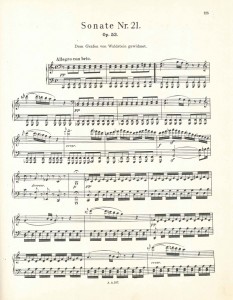 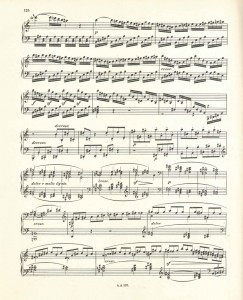 It was a challenge then as now to keep the music text in these editions as clear of commentary as possible.

Therefore we, too, traditionally group the necessary information in our Urtext editions around the music: Whereas the Preface comes up with remarks on the work’s origin and transmission, the Comments at the end of the volume provide a painstaking report as to why whichever source was or sources were consulted for the edition and where on good grounds the editor differs from them. In the Individual comments given at various measures, minor traditional differences as well as fundamental questions about the meaning of an indication can be explained so that here the interested reader finds all essential information, but is not encumbered with it while making music.

So far, so good – but experience shows that doing entirely without footnotes won’t work. That, for one thing, is because of the Urtext concept itself: even when we very accurately render the model, many times a commentary is still necessary, whether it be the translation of an uncommon performance direction such as ‘lange Haltung’ (long fermata) in Schubert’s Hirt auf dem Felsen (HN 969, S. VIII/1, just look inside) or relativizing a tempo indication by referring to the Preface as in Roussel’s Joueurs de flûte (HN 1092, S. 8/9). Such information is crucial for the performance of the music – which is why it has to be given on the music page itself.

The same goes for the classic problem with the piano sonatas of Beethoven, Mozart or Haydn: For the edition the autograph is also commonly consulted here in addition to the original edition, and when there are many differences between sources it’s hard to decide straightforwardly whether they have to do with the composer’s deliberate modification or are simply in error. This is especially so in the realm of dynamics – which is why here at crucial passages such as in Beethoven’s ‘Waldstein’ Sonata op. 53 (HN 946, S. 14/15), the editor reports the source findings in a footnote in order to make the musician directly aware of another feasible choice.

But once in a while a footnote may even have to be given sort of pre-emptively in order to ‘save’ the musician from making another choice – because often enough the unauthorized variants of a work are so generally known and popular that the Urtext can hardly prevail against them. So, numerous editions of Beethoven’s 3 Duos for Clarinet and Bassoon WoO 27 are based on a very error-ridden first edition, yet one that was soon followed by a revised print. Our Urtext edition now prints the work from this better source and requires quite a few new notes of interpreters familiar with this music – which to be on the safe side we have distinguished by footnote references to the comments (HN 974, S. 2/3).

While as a rule we are able here to be brief enough that the appearance of the music remains practically unaffected, there are also extensive footnotes at times in exceptional cases – whether it is to document an earlier version such as Haydn’s famous F-minor Variations (HN 912, S. 8/9) or in order to review the numerous authorized variants of such well-known works as Chopin’s A-flat major Ballade op. 47 (HN 937, S. 4/5) that are widely disseminated in later editions. With this as with others of our Chopin editions the footnote is not really about offering musicians a performing alternative – here they can come to know instead how a variant of this passage possibly known to them is regarded and where in the traditional context it stands. With this, though, we are heading towards the limits of an Urtext edition, actually yes, to avoiding commentary in the music text … But we find that our editions will tolerate that much verbal text – and what do you say?

One Response to »How much verbal text can music tolerate?«