Whilst browsing through the Henle publishers’ catalogue you may occasionally come upon the link ‘free download’. It offers the interested musician supplementary information for some of our editions whose verbal texts are already available online. These downloads primarily relate to the list of sources and readings, the so-called critical report referred to in Henle editions as the commentary part.  In some cases where this part was first compiled later (as in the early Mozart editions HN 1 and 2) or had to be limited on account of the edition’s size to basic comments (in many Chopin editions, such as, for example, HN 862, 882, 884, 960, 993, 1154), it is possible to get information about differences in the music text of individual sources that is not present in the edition itself. Downloads are offered, moreover, for two double-bass concertos by Dittersdorf (HN 759) and Hoffmeister (HN 721), respectively, in which the solo part is reprinted for specialists and experienced players in the so-called ‘Viennese tuning’ (strings tuned to A-d-f#-a). The situation is similar with the Arpeggione part in Schubert’s famous Sonata D 821 (see HN 612).

Another kind of addition can be found for the Cello Concerto in d minor by Édouard Lalo (HN 802). Lalo, ever anxious to polish the solo part in his concertante works, also took ideas from rehearsals and performances into consideration. That led in the case of the extant autograph of the cello concerto to a total of four different layers of correction, including individual passages that were altered several times, as the following example shows (movement I, measures 91-94).

Some of the corrections, though, he entered at a time when the printing was already in preparation. Thus, composing and printing overlap chronologically, and there are to some extent considerable differences between the various sources. Source evaluation is complicated by the fact that lost are galley proofs, together with the engraver’s model for the printed score. As a result, it is not clear where those variants in the printed score originated, that are not found in any other source or in any of the correction layers of the autograph piano score. Hence, on the basis of the gaps – in the extant sources as well as also in the documentation of the compositional and publication chronology – we are not able unambiguously to reconstruct a final version (cf. the detailed presentation in the critical commentary). This means, consequently, that in the end we can only approximate the form of the solo part intended by the composer; by the same token conversely, the cellist must be granted a certain freedom to depart from the edited music text and to choose variants from other sources. So, Henle publishers decided to offer for downloading, in addition to the commentary, a synoptic overview in which the solo part appears with respect to the main sources above the edited part (Erstausgabe Partitur = First edition of the score; Erstausgabe Solostimme = Solo part in the first edition of the piano reduction; Autograph Klavierauszug = Autograph of the piano reduction). 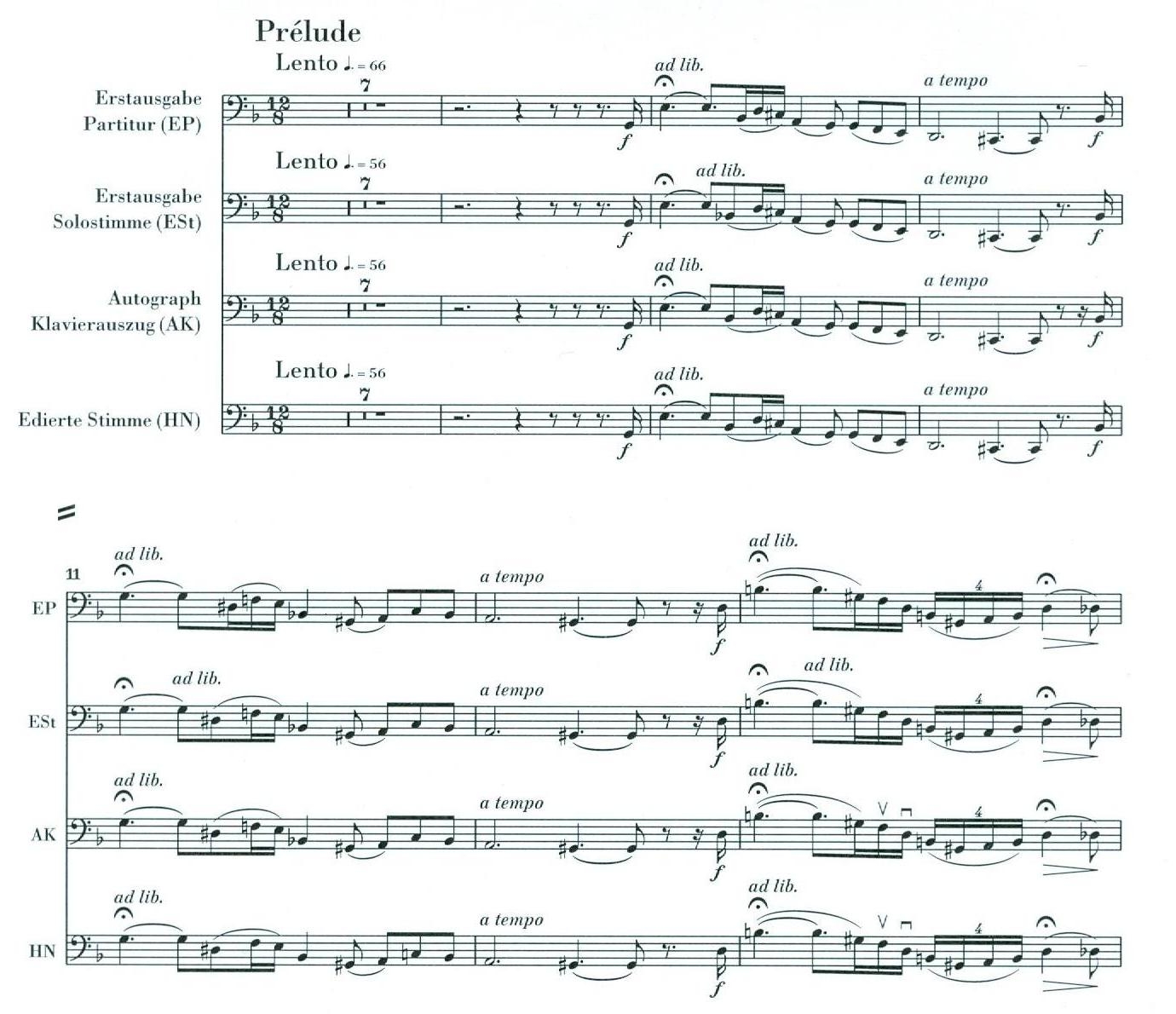 The differences concern essentially slur placement, bowings, expression and tempo markings, but occasionally also the rhythm (cf. measures 9 and 11 in the illustration). The readings of the various sources are in fact documented in the edition itself – as footnotes in the case of important differences –, but obviously the source comparison in the synopsis is substantially clearer – thus the free download is by all means worthwhile.

P.S. Here is a wonderful recording of the Lalo Concerto by Heinrich Schiff who is responsible for the supplementary marked cello part in our edition.

2 Responses to »Gratis, but not for nothing – the download of the Lalo cello concerto«