The autograph of Beethoven’s piano sonata, Op. 90, is part of the splendid collection of the Beethoven-Haus in Bonn; since digitalization some years ago, it has been available for contemplation on the Internet. Even if in comparison with many other Beethoven manuscripts it is relatively easy to decipher, upon first glance at various pages the question is whether we are actually dealing here with a ‘finished’ work.

If, for example, we open the manuscript to page 8, the impression is that after the first measure in the lower system Beethoven gives up notating in full and only sketches the further measures:

And yet we are also dealing here with the engraver’s model of the work, that is, with the manuscript from which the engraver of the original publishing house transcribed the music text onto the printing plates. But how then does he come to this conclusion:

The solution to the riddle is of course Beethoven’s indication ‘come sopra’. This he notated at that passage and at several others in the manuscript in order to direct the engraver to notate an earlier passage here ‘as above’ – in this case, the start of the first movement. This ‘come sopra’ notation causes trouble. For already in the first edition of the sonata, then in numerous later editions up to our present time, it has led to confusion and various interpretations. Specifically, it is about the upbeat of the theme. Let’s look more closely at this joining of the last measure of the development with the first measure of the recapitulation in the autograph and in the first edition:

The engraver took the last measure of the development over literally from the manuscript, including the upbeat to the theme of the recapitulation, and regarded the ‘come sopra’ as applying to the 1st beat of the recapitulation. He also implemented the existing pencilled addition: ‘Someone’ had at some time added an 8th note flag to the g1 of the upbeat and an 8th note rest (covering both staves and not easy to identify). In the left hand the upbeat is curiously enough not changed and remains a quarter note – unless the 8th note rest notated over both staves is interpreted as also applying to both staves. Then adding the flag in the left hand would have been forgotten and the engraver would not have understood the reading intended, which would most likely be this: 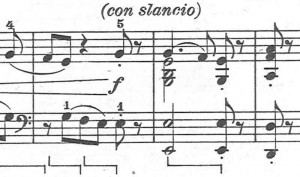 Many modern editions follow this reading, for instance, the current edition by ABRSM Publishing. And many historical editions (e.g., those by Schenker, Schnabel and Tovey) keep slavishly to the text of the first edition. But is this really the transition into the recapitulation Beethoven intended? Can’t we, indeed don’t we have to interpret the ‘come sopra’ notation in the autograph in another way? Well, that was already done by a noble contemporary of Beethoven’s, his patron and pupil, Archduke Rudolph of Austria. Rudolph was for a time proud possessor of the autograph of the Op. 90 sonata, and when Beethoven needed it for engraving the original edition, Rudolph himself copied the music text for his own library and his personal use. He interpreted the ‘come sopra’ indication in the recapitulation just as our G. Henle edition does: 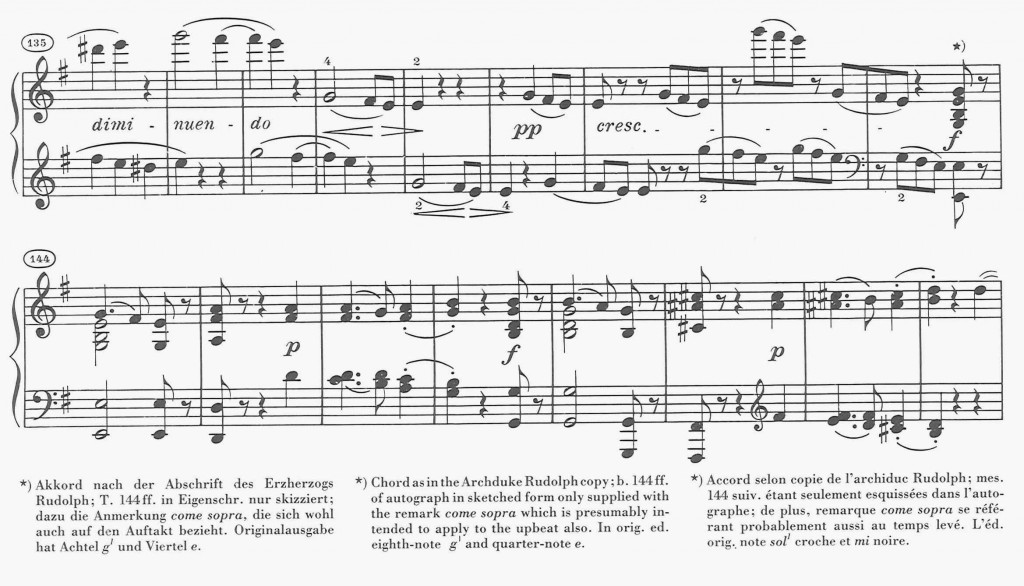 The editor of the renowned Wiener Urtext Edition also arrived at this view. Two Urtext editions therefore opted against the first edition verifiably proofread several times by Beethoven in galleys and generally accepted as reflecting his ‘last will’. We know, in fact, that the composer was a rather bad proofreader – though, could he really have thrice overlooked such an obvious ‘mistake’? If we wanted to accept this we would need good reasons. And these are not easy to find. Here are two clues:

(1) Looking at the manuscript of these two measures in the autograph with respect to the colour of ink and the thickness of pen nib, we notice that the character of the script shifts AT the upbeat. Beforehand the ink is darker, and the nib is broader or applied with more pressure. So, the writing flow was interrupted before the upbeat, which may also have configured the music. Hence, we could conclude that the ‘come sopra’ was already in force as of the upbeat. That is probably how Archduke Rudolph read it (he was not ‘distracted’ by the pencilled additions – see (2) – perhaps only added later).

(2) The pencilled additions at the upbeat are happily cited as evidence that the reading reproduced by Alfredo Casella (see above) was sanctioned by Beethoven. Since here he deliberately intervened again – so the argument goes – this reading must have been his and he must have wanted it so. Authoritative sources, though, were already in doubt as to whether the addition in pencil stems from Beethoven at all and not perhaps from the then publishing-house employee, Anton Diabelli, who likewise read the galley proofs of the original edition. Michael Ladenburger, curator of the Beethoven-Haus and editor of the facsimile edition of the autograph published by the local publishing house (1993), is inclined to this view. The argument of later sanctioning collapses, of course, if whoever made the addition was not the composer.

Are these clues sufficient to reject the seemingly authorized reading of the first edition? Murray Perahia and I are doubtful (that’s exactly why we are revising the G. Henle Urtext edition).

Presumably, the whole matter is not to be decided musically. Here are two persuasive interpretations: Wilhem Kempff plays the full chord as upbeat, Claudio Arrau only the third e/g1.