The current Wagner year is also not going unnoticed at the Henle publishing house, even if music stage works are not part of our offerings. With Isoldens Liebestod, that is, Franz Liszt’s piano transcription of the closing scene from Wagner’s Tristan und Isolde, we are for the first time publishing a work that is fundamentally based on another composer’s composition. (In contrast to Liszt’s Rigoletto Paraphrase HN 978, which is a free fantasia on themes from Verdi’s opera of the same name). Liszt’s congenial transcription seems to us, on the one hand, a suitable birthday present for the Leipzig Master, but also at the same time a splendid piano composition in its own right that has earned a place in our catalogue.

During work on our new Urtext edition (HN 558), which we are introducing at the Frankfurt Music Fair in April, there occurred a source situation that was for us both exceptional and unprecedented. Not only did we have to consider Liszt’s autograph and the printed editions of Isoldens Liebestod that appeared during his lifetime, but also Wagner’s model, whose text except for a brief introduction Liszt followed literally to the bar. (If Liszt’s virtuosic piano piece were not so pianistically ingenious and did not sound so orchestral, we could almost speak of it sacrilegiously as a ‘piano reduction’…)

It became clear that for specific questions the score of Tristan und Isolde represents an important corrective for the edition, because the first edition of Isoldens Liebestod, published in 1868 by Breitkopf & Härtel in Leipzig, as well as also the edition of 1875 revised by Liszt, which served us as the main source, exhibit several questionable passages. Liszt himself was in fact generally considered very meticulous in his proofreading and revision, as shown by this admonition to another music publisher:

‘You know, dear friend, that to me shoddy editions are an abomination; so pay attention to the least of my notes, including their f, p, cresc., etc. etc. and take these precisely into account just as surely as your bookkeeper does not fail to do with the thalers and groschen of your publishing-house accounts! My intellectual property is not less important to me than his material belongings are to the businessman, and I am most sensitive to slurrings of the engraving.’
(Letter to Julius Schuberth of 5 September 1863, quoted from Franz Liszts Briefe, ed. La Mara, vol. 8, Leipzig, 1905, p. 164.)

Nevertheless, with a number of proofreadings of Isoldens Liebestod several instances of ‘slurring of engraving’, i.e., corruptions and engraving errors, did escape even Franz Liszt, although we would suppose that it would be just the originator who would be most likely to have caught these. This paradoxical phenomenon is encountered in the case of many composers – but the danger is probably just this, that the creator is only too involved in ‘hearing’ a work and can no longer painstakingly correct the galley proofs against his autograph.

In Liszt’s case, we learn from his correspondence with Breitkopf that he was also glad to get the galley proofs already bound in a volume so that he could play through them more easily at the piano. So, his approach is completely different from that of the editor who at a desk stolidly compares the galleys note for note with the original model and that’s anyway what he is paid to do… And since Liszt virtually had his composition in his fingers, he obviously played past details such as forgotten accidentals or wrongly-positioned slurs along the way. Two examples from Isoldens Liebestod should quickly verify this:

In the first instance, Liszt notated in the autograph a tie, e-flat2—e-flat2 – short indeed, but for his handwriting, distinct – in the top voice of the right hand (see the arrow).

But the engraver erroneously placed the tie as a slur in the middle voice, so that now the second e-flat2 was to be struck again – an audible difference: 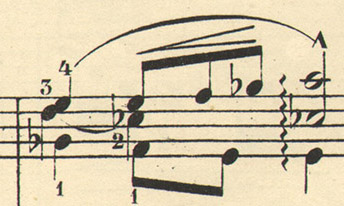 The engraver blundered with another ‘slip’ in measure 59: the sharp before d-sharp1 is here oddly superfluous (d-sharp is already indeed specified by the key):

Hence, several posthumous editions leave the accidental out entirely, but that misses the point of the problem, as is evident from the autograph: that is, the sharp actually belongs in front of the b:

That the autograph is really correct in both instances can now easily be confirmed with the aid of Wagner’s score; there the tie from the first example is in the melody of the 1st violin (colla parte with the song), and the b-sharp is a passing tone to the c-sharp1 in oboe, bassoon and trumpet. But take a look for yourself: on page 426 and 437 in the original conductor’s score of the Munich première of Tristan and Isolde, preserved in the Bayerische Staatsbibliothek and at present on display there in an exhibition well worth seeing!

One Response to »Wagner, Liszt, and Isolde ‘slurred’– how well do composers proofread their own works?«