Preparing a new edition of a work that has been previously published is an exciting task; yet, in many ways, more challenging than working on an edition for which one is reliant entirely upon the composer’s manuscripts and sketches.  As an editor, one must, of course, always have in mind the composer’s true intentions with respect to the work under scrutiny, and the presence of printed copies may carry both an advantage and a disadvantage in deciphering these intentions: an advantage, because a first edition is likely to have been prepared under the composer’s own supervision; and a disadvantage, because misprints and other errors may be compounded and extended in future impressions which may not have had the benefit of the composer’s steadying hand.

Especial care must be taken with printed sources when arrangements of a work are made by a publisher, and few other works have been arranged as many times of Edward Elgar’s popular salon piece ‘Salut d’Amour’, a new edition of which I am currently preparing for G. Henle Verlag.  Much stimulating discussion has taken place by email between Norbert Müllemann and myself regarding the versions that should be regarded as ‘authentic’ – in other words, those that were prepared by Elgar himself for publication. The firm of Schott bought the copyright of the work outright from Elgar in 1888, meaning, in effect, that they could quite legally make any arrangement of the work they chose; and, indeed, a proliferation of such arrangements appeared in the late 1890s, in all probability as a way of generating as much income from the work as possible.  However, in preparing our new edition, we have decided to issue the versions for solo piano and for violin and piano, autographs of both of which survive and which can therefore be used to validate the early printed editions published by Schott; and probably also the version for cello and piano in the arrangement Elgar made as a gift for Dr Charles Buck, a friend and an amateur cellist.  Although this last was not published, being superseded by a later arrangement which was, in all likelihood, prepared by one of Schott’s ‘in-house’ editors, it is clear from Elgar’s correspondence with Buck that he considered his own cello-and-piano version suitable for publication; indeed, this version is more interesting and individual than that published later by Schott.

Examining a composer’s autograph always carries a certain excitement.  This excitement is heightened when it reveals a certain manner – almost an idiosyncrasy – of notation, one that sheds light on how a composer wishes his work to be understood and performed by the executant musician.  Such a manner of notation is revealed in Elgar’s sketch for the solo piano version of ‘Salut d’Amour’.  As the reproduction below shows, Elgar’s first thoughts  were to present the melody immediately, without the two-bar preamble that characterises the version for violin and piano (see first system); but he evidently immediately discarded this idea. 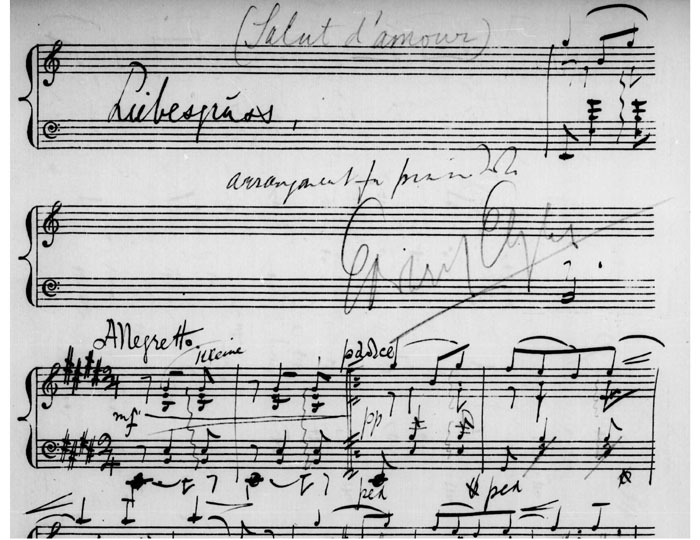 What intrigued me especially about this opening was discovering, upon closer examination, the word ‘kleine’ (for ‘kleine Noten’ – in English, ‘small notes’: an indication that the notes in question should be set in smaller type than the others) written in ink above the treble stave, with a lighter (perhaps pencilled?) line linking the word specifically to the notes of the right hand (see third system). This off-beat crotchet/quaver figure, though providing a lilting energy that is essential to the work’s effect, is, of course, melodically subservient to the theme that enters in the third bar. It therefore seems that Elgar wished to draw the performer’s attention, visually, to the position of this rhythmic figure within the layers of voicing and, thereby, to suggest a particular manner of execution – quieter, perhaps, and with a more veiled tone-colour than that used for the melodic line.  Moreover, this visual differentiation was clearly, for Elgar, a vital feature of the work’s appearance: these smaller note-heads are printed in the published editions; and it is entirely probable that Elgar insisted on this. 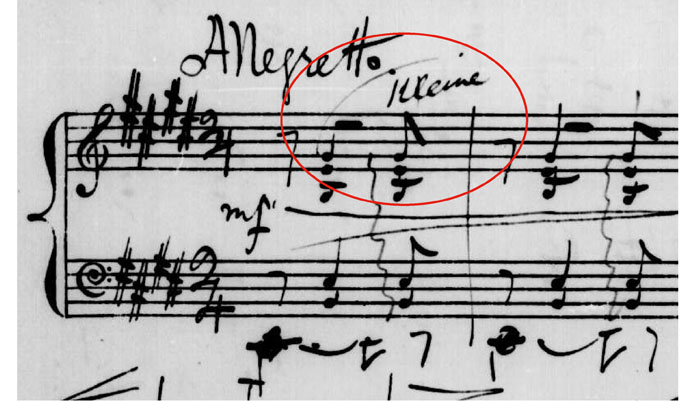 It is rather fitting that such a notational idiosyncrasy should be evident both in one of Elgar’s earliest pieces and in one of his latest.  In the closing pages of his Sonata for Violin and Piano, op.82, completed in 1919, he quotes from his ‘Enigma Variations’ of some twenty years earlier.  The quotation is important – Elgar was, at the time of the Sonata’s composition, deeply grieved and disorientated by the loss of some of his closest friends, as well as by the irrevocable dissolution of the society in which he had been brought up and which hosted some of his greatest professional successes; and the citation of a work that is concerned with ‘my friends pictured within’, and which had heralded his fame and success, has a poignant significance.  Just how vital that reference is to Elgar’s narrative may be deduced from the fact that, in the Novello edition, prepared under Elgar’s supervision, the notes in the piano part that form the quotation are printed at standard size, the surrounding notes being printed in smaller type.

As an executant musician, one often encounters notes printed in small type in published editions; and, usually, these refer to some alternative version, or to a way of notating a passage in order to make it easier for the brain – and the fingers – to assimilate.  In these two cases, though, there is no question of the notes in small print representing an alternative version: in both ‘Salut d’Amour’ and the Sonata, all the notes given are to be played.  They are, however, to be played in a different manner to the notes printed in full-size type: they may be played more quietly, with a lighter touch, or with a more shadowed tone.  Like figures in a crowd in a painting, they add depth and energy to the musical picture; however, they are not the principal focus: that focus is reserved for the beauty of a singing melodic line, or for a motif that carries heart-rending significance.

This article has been written by Rupert Marshall Luck