Any of you who not only had a hearty laugh at our April Fools’ joke about Henle’s cleaned-up part, but also may even once have already had a go at a Reger sonata, will know that in the case of Max Reger – as with so many other late romantic composers – clearing out or cleaning up is in fact no joke at all. The extravagantly diverse ways that in scores at the start of the 20th century tempo, dynamics, articulation and expression were specified down to the last detail absolutely buried the music at times under the markings and were hardly consistent with any directive that a so-called practical Urtext edition ought then to present a music text more or less easy (and quick!) for the musician to read.

Not for nothing did Max Reger usually opt in his autographs for a second colour (red instead of black) for indicating this parameter – which indeed makes the thing prettier though not necessarily also easier to read, as shown by the dynamics notated now above, now below the staves, or the espressivo information squeezed into the stave on the first page of his clarinet quintet. 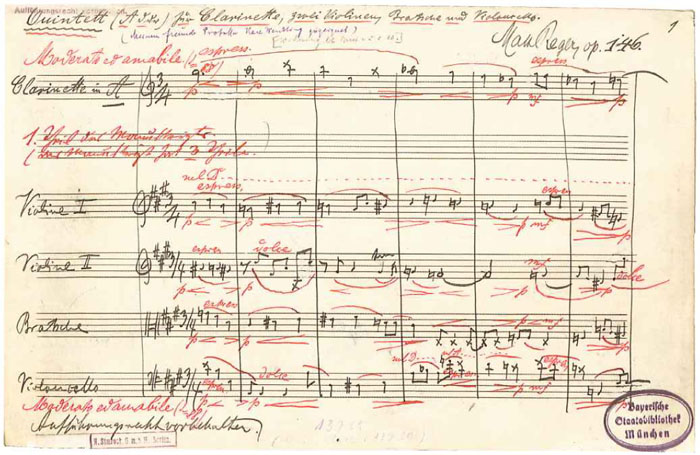 It becomes even more difficult when, as in Reger’s clarinet sonata, Op. 107, the manuscript is heavily revised and whole sections of it are crossed out, various halves of measures re-combined and many rhythms repeatedly modified. Here, by his own admission, the composer himself must first of all have had to resort to a “search for mistakes” before he could send his autograph to the Bote & Bock publishers (Berlin) in April 1909. There, this anything but neat engraver’s model was then organized to the best of their ability and transferred into print, whereby just the correct reading of accidentals and reasonable layout detailing tempo and dynamics at passages such as this (1st movement, measures 15–18) might indeed have challenged the music engraver: 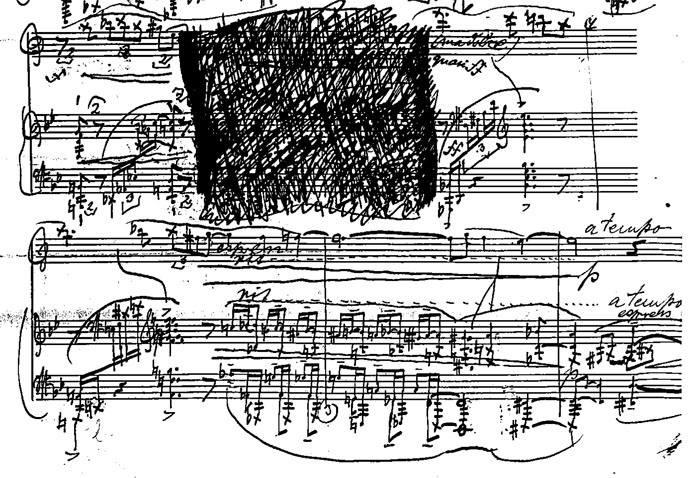 Complicating readability still more, even in the print, is especially the harmonic expansion so typical of the late romantic period, combined with Reger’s penchant for continuously alternating duplet and triplet figures in 6/4-time: There is hardly a note without an accidental (although Reger is then still differentiating between necessary and bracketed “cautionary” accidentals), so that all of a sudden we think we’re in 12-tone music. There is hardly a rhythmic figure without a clue as to whether it is to be to played as triplet or duplet; hardly a tempo or dynamic marking that were not still to be modified by an addition (often bracketed in turn). 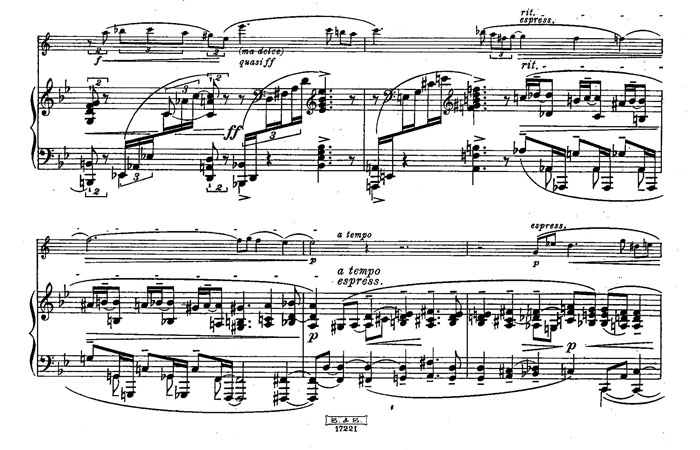 So, even in the case of such a simple source situation as here in this sonata, with a first edition for which the composer was responsible as primary source, and an autograph engraver’s model for consultation in questionable passages, there is still quite a lot for the editor of a modern Urtext edition to do. Not only do we have to correct errors in the first edition that were overlooked in the clutter of signs, but we must also decide which of the model’s aspects are to apply and which it is reasonable to modify in line with the rules of modern music setting. For by no means is even an Urtext edition an exact reproduction of the source, but it instead standardises the music text and clears out of it any superfluous or confusing markings.

That this is to be done very cautiously and prudently (and explained in the Comments) goes without saying. How many details are to be considered in the process can be seen in the engraver’s model by Michael Kube, who edited Opus 107 for us in a collection of the Reger sonatas and pieces for clarinet and piano (HN 909, sonata, Op. 107, also edited separately in Reger’s own arrangement for violin, HN 1097, or viola, HN 1099). The various entries in red, green, blue as well as pencilled questions in the lower margin give evidence of the intensive exchange between editor and house editor in the process of deciding these questions – often augmented by input from our music setter Michael Nowotny. 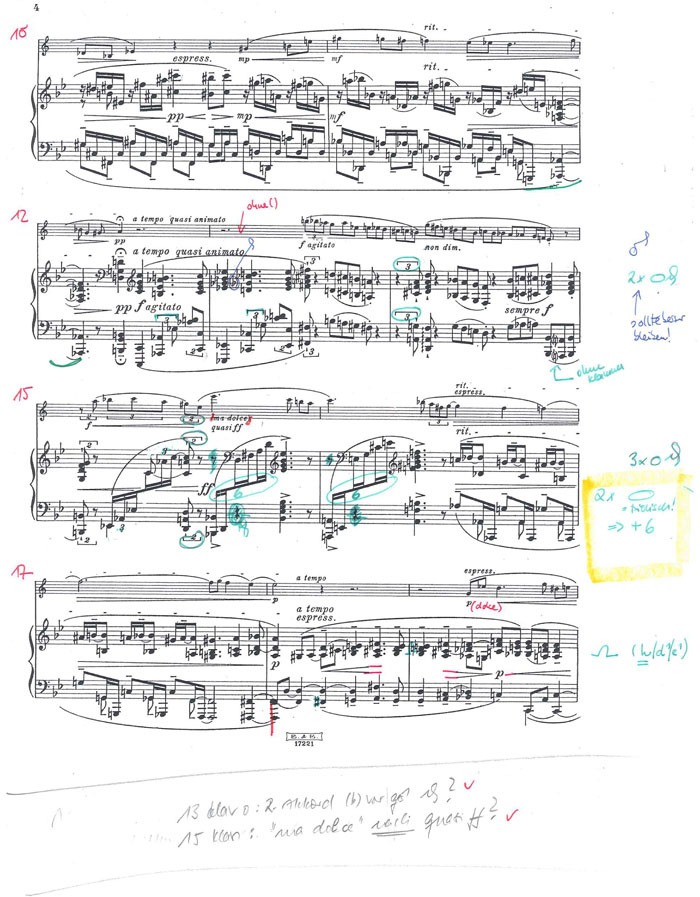 Whereas fundamental decisions such as eliminating Reger’s brackets in the case of cautionary accidentals and his additional “afterthought” expression markings were already analogically affected by prior Henle Reger editions, detail questions for accidentals (measure 13), triplet- and duplet information (measures 14, 15) or appropriate positioning of expression markings (measure 15) were now and then first clarified in the “pencilled dialogue” between editor and house editor. Even standardising the placement of rests in the piano part in the case of figures going above the two staves – especially annoying in measure 15 of the first edition (and likely due there to the later contraction of this measure in the autograph) – or revising the confusing triplet marking 3 (instead of 6) in measures 15, 16 was necessary before we were satisfied with the way the music looks. 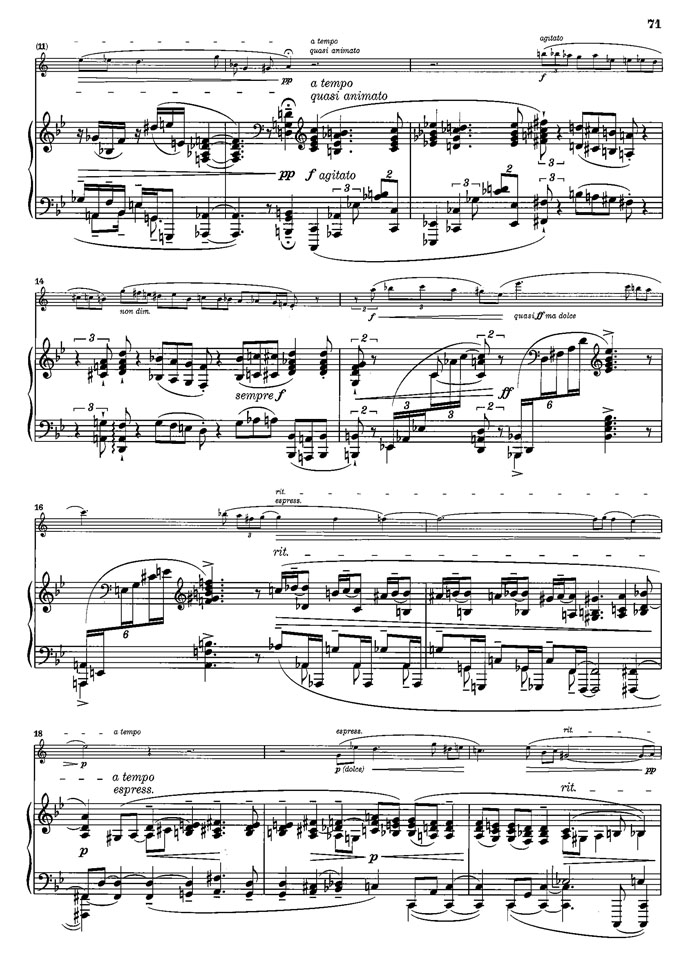 Reger himself repeatedly characterised this late sonata as “a very light, approachable” one or even “an unusually clear work” – with our “cleaned-up” Urtext edition we hope to make this something that the interpreter can also experience.